Bill, Ian and Nigel Bill worked in the cab, fitting the clack box to the injector pipe work. Trevor and Nigel Bill completed the securing of the 20 or so nuts and bolts around the smokebox. Trevor also removed a seized piece of threaded bar from one of the hand rail stanchions which had damaged threads - a new piece will be fitted. Meanwhile Nigel Hall continued adjusting the cladding and securing it with cup head screws: some were re-tapped to allow the screws to go fully down and match the others. Gordon Wells completed the new lubricator oil supply pipe work.

Only outstanding work now is some securing brackets to fit next week.

On Wednesday it was raining again until afternoon, with Bill Dobson, Steve Hyman, Nigel Bill, Nigel Hall, and a welcome re-appearance of Ian McCall and, by lunchtime after meetings at Pickering, myself to the team after a long absence due to Covid concerns.

Bill, Steve, Nigel Bill and Ian McCall spent the day fitting the copper pipe work in the cab. Most of this is now completed, including the clack box to injectors (see photo). Steve also replaced all the bolts on both cab foot steps for longer ones. I was given the job of fitting some self tapping screws into the cladding underneath No 4 section but it was very awkward because of the presence of the reverser giving very limited access, but I did manage to fit one of the three required screws - felt very inadequate! Nigel Hall again continued with the cladding, the front belly band being slackened and moved underneath to a central position and secured. The two half bands were fitted between Nos 5 and 6 cladding sheets. Now he can start preparing the cab and boiler for painting. 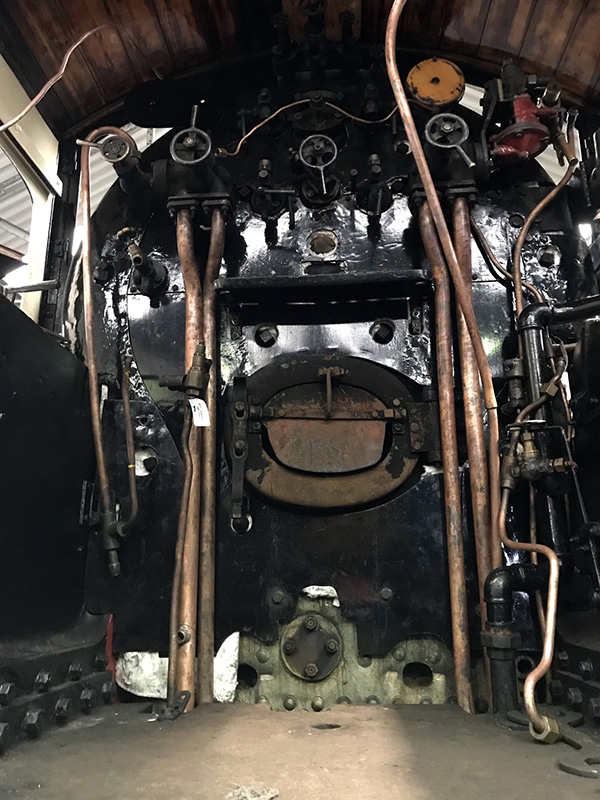 On Friday 28th Bill was in attendance at Deviation Shed with the coded welder who welded the main steam pipe joints on both pipes as these were only tacked on.

I collected the remaining parking passes and new NYMR ID cards from the MPD and these will be going into the post over the weekend to those who are still waiting for them.