Lovely hot weather this week. Too hot for working on steam engines!

We had Bill Dobson ,Nigel Bill , Nigel Hall , Paul Jameson , Trevor Wilford ,Gordon Wells , Ian Pearson, Terry Newman and James Pearcy. James brought a window from the K1 which had the glass broken last Friday at Fort William with the aim of swapping it for a a spare in Deviation workshop. But the ones in our workshop were the wrong size so he removed the broken glass and he is going to a glass specialist in Darlington for new glass fitting.

Our team has been working on both the J27 and Q6

On the J27 the the water hoses and steam heat hoses were connected between engine and tender the drawbar spring plate and locking nut fitted. There was a problem as we soon found out ,the locking nut was 4 1/2” long far too long when tight to fit a cotter pin .So it was removed then cut to 2 1/2” .To get this nut tight it took four of us on a rope and one underneath on the ratchet spanner to get the nut sufficiently wound up to allow the cotter to be fitted. Note ,with this new nut on the J27 Drawbar which is the same size as the Q6 drawbar nut we have to use the same ratchet spanner !

Q6 jobs, a die nut was run down all eight header studs in preparation for fitting the main steam pipes. Silver soldering the last of the lubrication pipes was completed The steam brake exhaust pipe was fitted. Ash pan sprinkler pipe work was progressing some flexible pipe work still required for completion. Pressure gauge mounts fitted. The boiler cladding preparation continues with wet dressing still a lot of work in this area to do before gloss paint can be applied.

On the J27 a few jobs were completed left over from Tuesday with the vacuum hose was fitted , Brake linkage between engine and tender fitted. Split pin fitted to drawbar nut.

Boiler cladding preparation continued with more wet dressing. A pattern for the cylinder cover copper joints was delivered ,made to Bill Dobson’s speciation fitted perfectly. The copper ones have now been ordered. In the cab more pipe work and gauges fitted and the metal surround where the boiler pressure is indicated on a plate. Various rods and a small piece of cladding which lives on top of the boiler near the whistle all dressed and primed. Underneath the locomotive the vacuum pipe and steam heat pipes were secured and clamped. Eight bolts nuts and washers were ordered last week for the main steam pipes. These were ready for collection on Wednesday afternoon,Jon Bradley offered to go to Teesside and collect them. So arrangements were made with the MPD for fitting these steam pipes on Thursday.

Also two representatives fromNorth Tyneside Railway came and inspected the J27 and were very happy with it!

In the morning Bill Dobson and Paul Jameson with the aid of MPD staff attempted to fit the main steam pipes.  It was found that the lenz rings didn’t fit the new steam pipe flanges, this to be rectified next week. Jon Bradley was also at Deviation shed on Thursday and fitted the wooden seating into the cab.

Today the weather was more reasonable. just 15 degrees. In the afternoon clouds reminiscent of Fort William covered the hills and it started to rain - really like Fort William. Now that the paint would flow again Nigel Hall  gave the boiler a coat of black gloss.Also today two new firebox side bearers for the back grate have been delivered from William Lanes Foundry by Mike Bloomfield. 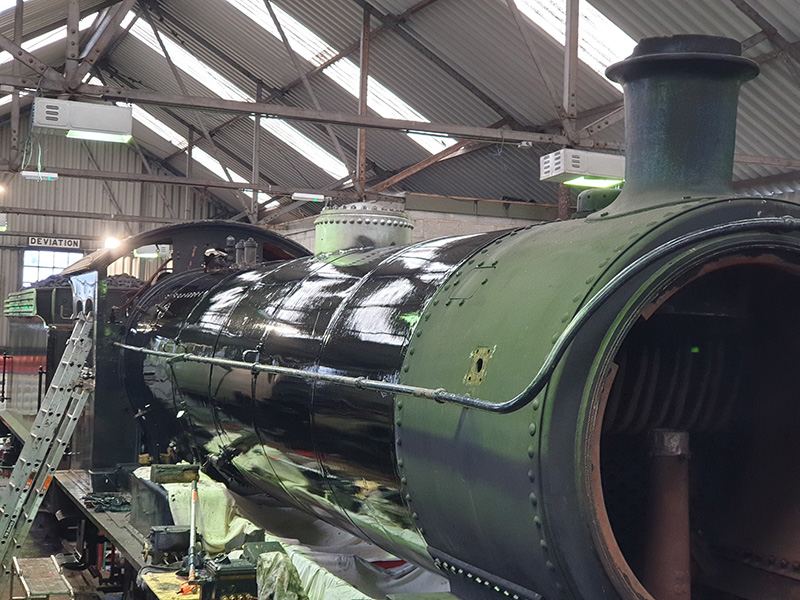