Nigel Hall was at Grosmont on Saturday 3 June when no other work was being done on the Q6, and was able to put a coat of black undercoat on the outside of the cab and another coat of varnish on the cab window frames.

For the regular working party on Tuesday, it was a wet morning but on approaching Grosmont the sky started to clear and the sun was shining on Deviation Shed. At least until lunchtime, when the heavens opened with a heavy downpour. More heavy showers followed during the afternoon. Those dodging the showers were Bill Dobson, Nigel Bill, Trevor Wilford, Nigel Hall, Gordon Wells, Ian Pearson, and, later, Jon Bradley.

The main job of the day was to remove the lefthand piston and investigate why it would not travel the full length of the cylinder. Most of the team, which included two MPD cleaners - Allan Dawson and Matt Edmondson - for a short while, were involved at some stage of removal, which was a very heavy and time consuming job. The crosshead cotter and cylinder cover were removed, then the little end pin and connecting rod. The splitting gear (borrowed from the MPD as our own does not fit) was fitted to remove the piston rod from the crosshead and then it was found that the pin that fits inside the splitter was too long so an inch had to be cut off on the band saw! Eventually the crosshead was split and the piston removed. On inspection, a ridge of metal was evident at the rear end of the cylinder. 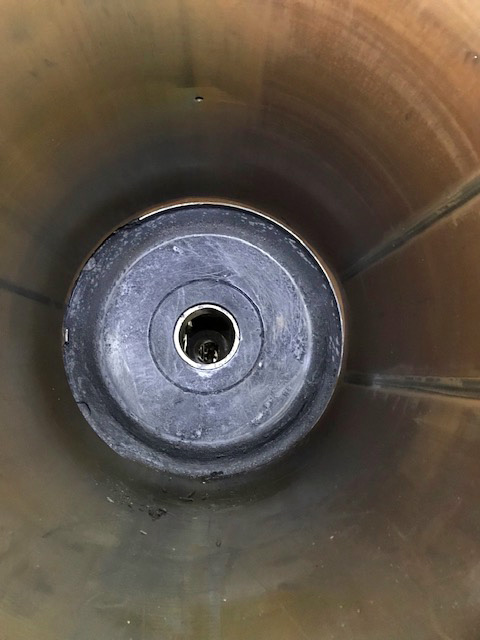 The other jobs completed were fitting of the front vacuum exhaust copper drain pipe and securing bracket that had to be welded to the smokebox saddle, the outside of the cab had more preparation and was now ready for black gloss, the cab windows were rubbed down again and given another coat of varnish and the righthand leading axle box was re-tapped and the new oil feed box fitted. A new bottle of argon gas was brought in by Trevor and connected to the welding set.

The defibrillator had its monthly check and inspection. The last flexible oil pipe was fitted, as were the rear vacuum exhaust pipe drain along with a securing clamp, and the steam supply pipe to the reverser. The small securing cotter was made and fitted to the righthand crosshead cotter, and the front sands operating rod fitted into cab and connected to the sand box. The front damper handle was fitted in the cab and pushed through between the boiler and cladding, then connected to the damper door via another rod and secured with a new pin which was made in the machine shop by Owain. Bill borrowed an air operated die grinder from the MPD. An air line was set up to our compressor and about a third of the ridge was removed inside the cylinder. Not an easy task, and Bill reckons another full days work to remove the rest of the ridge. Replacement glass was fitted to the cab window. The front vacuum exhaust pipe requires some slight repositioning - a job for Gordon next time. Ian Storey Engineering were unable to do the necessary machining on the steam pipes, and possible alternatives are now being pursued with the help of Ian Selkirk of Hogg Engineering.