Tuesday was a miserable misty damp morning for the journey to Grosmont, but later in the morning the sun broke through to present a fine day. At Deviation Shed the working party consisted of Bill Dobson, Nigel Hall, Trevor Wilford, Gordon Wells and Ian Pearson.

Pipe work for the ash pan sprinkler was put together once various fittings had been made, and by the end of the day the pipe was almost ready. The cab windows were rubbed down and given another coat of varnish on each side. Inside the cab, self adhesive labels were applied to the driver's side indicating forward and reverse for the steam reverser, and open/shut for the cylinder cocks. Then the black area in the cab was given a coat of varnish. The ejector shield was fitted and the manifold cover was fitted to the front of the cab. The lefthand cylinder cover copper ring was removed and annealed. Bill spent all day trying, with great difficulty, to remove the ridge at the rear of the cylinder but didn’t achieve very much. This is due to the restricted area to work in (and poor quality tools) as the attached photo of Bill inside the cylinder demonstrates. The front buffer beam was sanded down to remove its NER number. 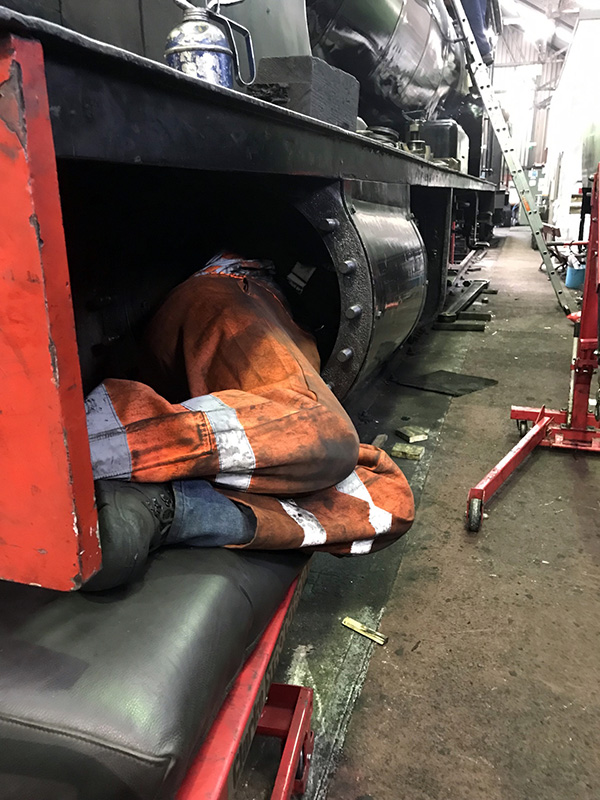 Wednesday saw another wet foggy morning at Grosmont but the sun shone after lunch and it got quite hot. The crew this day was Bill Dobson, Nigel Hall, Steve Hyman, Ed Bolam, Nigel Bill, Chris Lawson and Ian Pearson.

Bill has asked for help from the MPD to complete the grinding at the rear of the cylinder, which they have agreed to provide. Two of the MPD apprentices have subsequently been grinding the ridge in the cylinder but the job is not yet finished. Steve Hyman completed priming of the new lubricator pipes on the right hand side to establish the oil is getting to the new oil blocks. On the left side Nos 4 and 5 have been done, leaving left Nos 1, 2, and 3 to do next week. The cylinder lubricator was also primed and checked. Following some repairs it is now working fine. The front lamp bracket was fitted between the top of the outside of the smokebox and surrounding 'cow horn' hand rail with a struggle. The slacker pipe feed pipe which was made up on Tuesday was cut to size , bent into the correct shape, the brass connection soldered on and then fitted to the valve in the cab. One side of the cab window frames received yet another coat of varnish. A start was made with rubbing down the hand rails on both sides of the cab and part of the left hand one on the boiler. Nigel Hall applied some black paint to them and a coat of white primer/undercoat to the front buffer beam.

On Thursday, Jon Bradley came in after lunch and gave the cab windows a final coat of varnish. He also fitted a piece of wooden beading on the cab roof. Next Tuesday he will re-glaze the window that had a broken pane and fit the brass surround.