As with the rest of this week, Tuesday was a very stifling, hot day in Deviation Shed for Bill Dobson, Nigel Hall, Jon Bradley, Gordon Wells and Ian Pearson.

A small amount of the ridge in the left hand cylinder remained from last week when the MPD staff were working on its removal, and Bill dealt with it. With the aid of our lifting equipment the lefthand piston was then fitted into the cylinder and a bump test carried out which was OK. On the righthand side, the piston was connected to the con rod but the big end bearing required fitting. So, after a struggle to get the bearing fitted by moving the engine a short distance with a pinch bar, it seemed there was a problem with the piston not travelling far enough back. It was thought it could be the same issue as the left side, even though a satisfactory bump test had been carried out on 23 June. As it was late in the day all that was done was to loosen the cylinder cover ready for dismantling the next day.

Other work done was cleaning the cab windows' glass, the new pane was fitted to the frame that had broken glass, and some more wooden beading fitted to the cab roof. The front buffer beam was rubbed down and given a coat of red gloss, but, unfortunately, later, while fitting the lefthand piston, somehow, someone touched the corner of the buffer beam with their oily gloves (see photo) - the black hand of the fitter! A lot of paint touching up under the frames was done, and the righthand boiler hand rail rubbed down and primed. A start was made around the tender shovelling area, dressing the old paint and rust, and a coat of primer was applied. 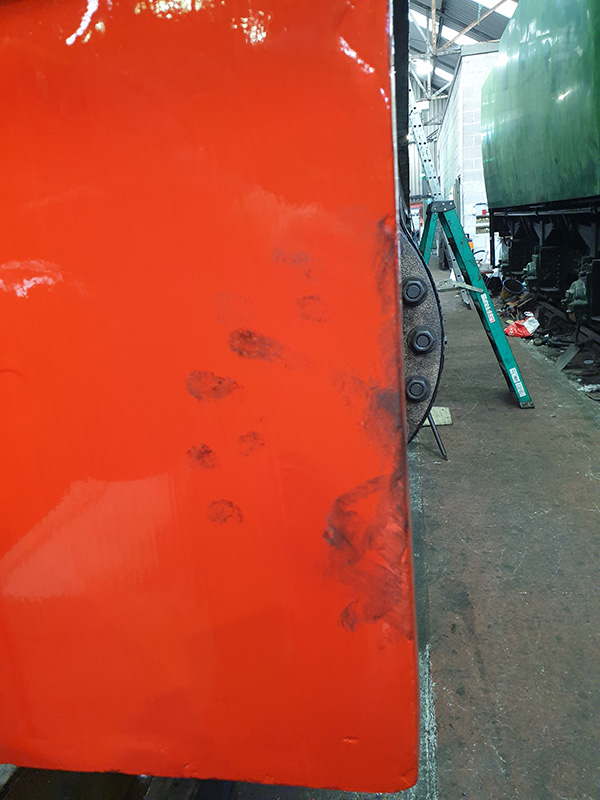 Wednesday was no cooler for Bill Dobson, Steve Hyman, Ed Bolam and Nigel Hall. For Ian, who was driving on the NYMR, it must have been unbearably hot in the already hot cab of a steam locomotive.

Using our lifting equipment, the righthand piston cover was removed, then the piston detached from the crosshead, and the piston extracted. After removal, the cylinder was inspected to find a ridge of metal similar to that which was on the left side. Bill arranged with the MPD for this to be removed during the week. On the lefthand side, the con rod was fitted to the crosshead along with the big end bearing and shimmed. Bump tests were carried out - all were satisfactory. A new small securing cotter is to be made for the big end large cotter. More preparation work around the shovelling area of the tender was done and a coat of primer applied. Also more paint touching up around the engine frames and hand rails given some more paint. The three remaining oil pipes, L1,2,and 3, were primed satisfactorily. Bill has spoken to Ian Selkirk of Hogg Engineering about the main steam pipes. They are now at Oak Engineering at Hebburn on Tyneside and are about to be machined.