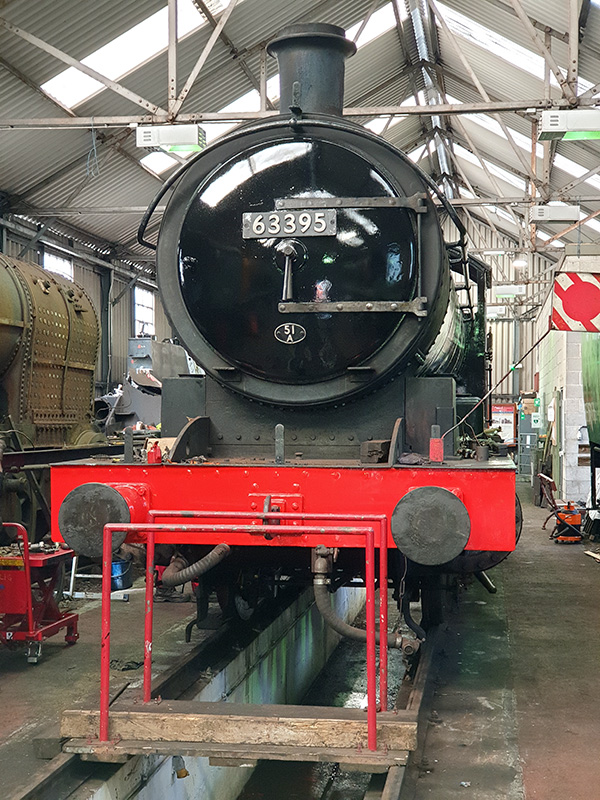 The new Q6 axle box lubricator was put into position, bolted down and all 8 oil pipes connected. The drive shaft had been fabricated out of a piece of steel strip about 2” in width. At each end of the drive shaft, connections were made, welded onto the drive shaft and dressed. Two new connecting pins were made by Barry Nesom at the machine shop. The drive shaft was connected and manually worked by hand to see if it was working correctly. At this point it worked OK but requires some slight modification to get the drive working to its full travel. This was to be done on Wednesday. It was noticed that on the cylinder lubricator, a spring had broken on one of the pumps which dropped into the oil reservoir. This will have to be fished out on Wednesday as well. This is not a coil spring: more like a clock spring but not as long!

Four securing clips were fitted to the intermediate axle box horn guides after drilling the holes and tapping the threads. Four still to do on the driving axle horn guides. Tom Lee, the MPD boiler smith apprentice, completed the righthand cylinder grinding by mid afternoon. Work was also completed on the cab windows, and an attempt made to fix curved beading to the front roof section of the cab, but it snapped. This will have to be rectified next week. Some buffing of the copper pipe in the cab was done. The tender shovelling area was given a coat of black undercoat. The smokebox door was rubbed down and given a coat of undercoat.

After cleaning all the swarf from the righthand cylinder and annealing the copper cover joint, the piston was fitted with the cover following. Then the little end pin was removed, disconnecting the con rod. This allowed the bump test to be carried out successfully. The little end pin was refitted followed by the big end bearing. However, to get this fitted comfortably 50 thou was machined off the glut. The packings and oil pot were then fitted and secured. Both cylinder covers were tightened up using a torque wrench.

The lubricator drive shaft was modified by Steve on Wednesday and now works fine. Bill managed to retrieve the spring from the lubricator oil reservoir. In the meantime, Martin Ashburner from Armstrong Oilers made a new spring. Bill had a go at fitting it but it was too fiddly a job for the end of the day and he had to leave it for Gordon to fit next week. The four driving axle horn guide oil pipes were secured with clips after drilling and tapping. The tender shovelling area and smokebox door were given a coat of black gloss paint.

Machining of the steam pipes at Oak Engineering is finally due to start on Monday and they should be available for collection on Thursday.