Work on weighing the Q6, which would have to be done on No 5 Road pit, was cancelled due to other priorities - the S15 being fitted with new brake blocks and problems with its TPWS/ AWS system. Then, later in the afternoon, the 9F was put inside No 5 Road to wait for its wheels to be measured on Wednesday morning. It was so frustrating when we had been waiting since last Thursday for the weighing to commence.

However, some jobs were done on the Q6:

Up at Deviation Shed, the defibrillator was given its monthly check, and the pit walls were completed with a coat of off white emulsion (see photo). The Railway's lifting tackle inspector arrived last week to check our small jack, strops and shackles. All tested satisfactorily and a white dot applied as this is now the new colour code for lifting appliances. Please do not use any with a different colour code. 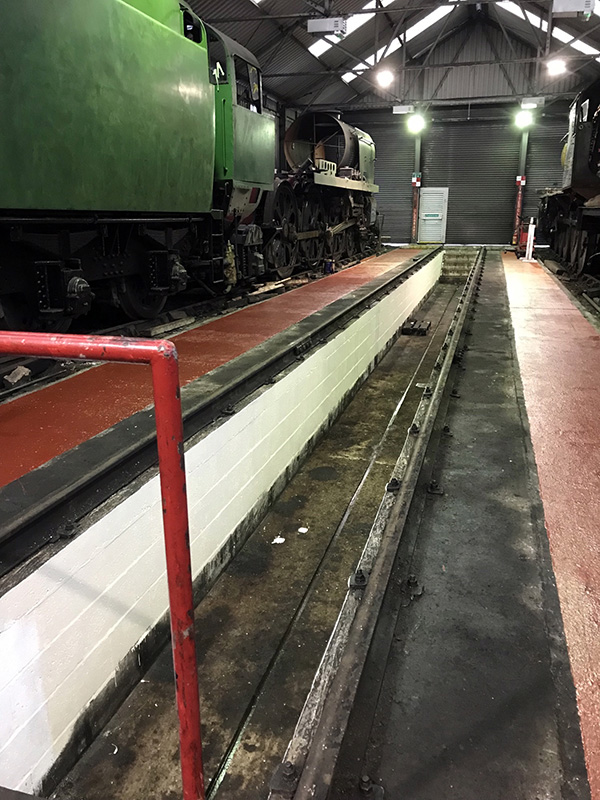 On the Q6, the regulator was shimmed and secured onto its fitting in the cab.  This is only a temporary job as it will need welding and machining when time allows. The fire grate was fitted out ready for lighting a fire in the near future after weighing has taken place, and the locomotive moved over to No 5 Road later in the afternoon prior to putting the weighing equipment on to the pit. On Thursday, the locomotive was weighed satisfactorily, with no problems found, and the tender was successfully weighed yesterday (Friday). The plan now is for a warming fire to be put in on Sunday evening, ready for an internal steam test on Monday. Assuming that goes well, then the boiler inspector will be invited to attend for the formal steam test, following which the spark arrestor will need refitting and some running in should see the Q6 return to operation - hopefully in time to join the J27 for the Steam Gala at the end of September.