Following the boiler lift on Monday last week, we have done another two days work on the K1. 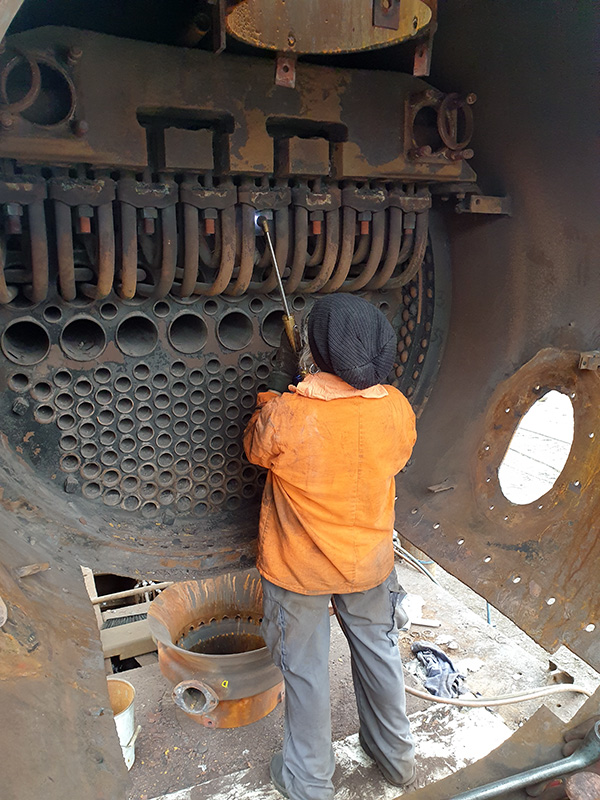 All superheater elements have been removed as have the petticoat/ejector exhaust ring and all but the front two crinolines. The firebars have all been removed from the ashpan which has now been thoroughly examined. It is in sound enough condition to repair rather than replace.

On the frames, the diaphragm plate has been removed as have the spring hanger nut locking plates. Some initial cleaning between the frames has also been undertaken. In addition some of the cab pipework has been re-ended in readiness for refitting when the engine is reassembled.

In the coach the work bench has been improved by mounting the vice on a steel plate. This makes for a much more robust arrangement and we can now carry out brazing work on the bench without setting fire to it!

Many thanks to Angie Buxton, Mike Bloomfield, Steve Gibson, Les Harper, Chris Henwood and Rolly Bingham who have all worked on the engine or coach since the last report. The attached photo, taken by Chris Henwood, shows Angie working on element removal. It shows that either the K1's boiler is very big or that Angie is very small - you decide!