Ian Pearson reports that Wednesday was a cold day with patchy clouds, some sunshine but heavy hail showers. Present were David Potter, Ed Bolam, Paul Jameson and Ian. Bill Dobson is likely to be away in Scotland for most of December.

After the Q6 was shunted on to the pit near Deviation shed, some work left over from Tuesday was carried out. The regulator gland had been leaking: this was tightened up, along with the steam reverser cataract cylinder rear gland. A bolt which secures the steam valve spindle to the operating rod that is attached to the steam reverser was found to be fouling the rod's movement and not allowing steam to be shut off from the valve on top of steam cylinder. When opened it allows oil to drain into the cylinder small slide valve. This bolt was replaced with a shorter one.

The fire grate was cleaned and the ash pan cleared out and a new warming fire set and lit later in the afternoon as the Q6 was booked to work the Moorlander diner on Thursday lunchtime. Attached is a photo Ian took on the Thursday of the Q6, masquerading as Prancer, having its smokebox emptied by fireman Mike Burn after its trip to Pickering and back with the Moorlander. It is expected to be the regular locomotive for the diner throughout December. 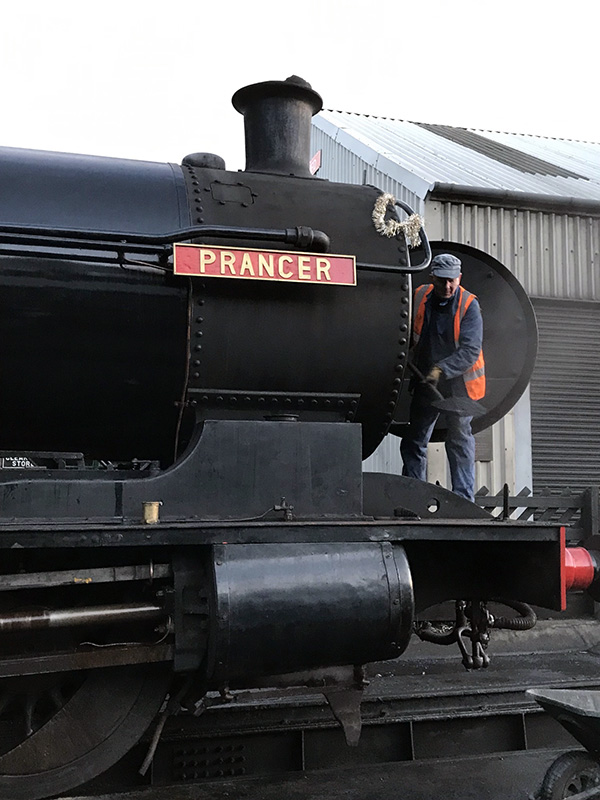 The Defibrillator was checked and was OK.