It was a fine, mild, slightly overcast day at Grosmont on Wednesday with Bill Dobson, Steve Hyman, Ed Bolam, Nigel Hall and Ian Pearson. I attended later in the morning but had to leave early afternoon.

On arrival at the MPD, Nick Simpson informed Ian that a translucent roof panel at the south east end of Deviation Shed had been damaged during the recent storms Malik/Corrie. On inspection, most of the panel had blown away, but part was left hanging, although secured at one side and flapping about in the breeze. This area was cordoned off and a warning sign put up. Ian and Steve, also dismantled the scaffolding which was put up at the side of the J27 to allow the boilersmiths to work on the stays, and then pinch barred the J27 back to allow the bridge across the pit to be put back and allow better access around the locomotives due to the damaged roof panel. The NYMR building team has inspected the damage and are looking for a replacement sheet. The damage has been reported to our insurers for a possible claim.

Bill has been keen for some time to start fitting atomisers to the Q6, so, Bill and Ian started work on this with the removal of the four non-return valves and bracket. As the atomisers will be fitted a little lower than the non-return valves, Bill has made a new bracket which required various holes drilled to allow the atomisers to be fitted. Ian started drilling into the frames for the new atomiser bracket. Ed continued the never ending cleaning task, concentrating this time on the righthand side of the engine, wheels frames, rods and both running boards. Steve had started to make two metal plates to fit around both trailing horn guide oil box pipes to stop the pipe unions falling beneath the wheel splasher, but this didn't work so he has fitted copper wire around the pipes to retain them instead.

I came in to pick up some insurance paper work, liaised with Bill and Paul Middleton on various operational matters, and made some tea.

On Friday Bill, Ian and Richard De Sadeleer were present at Deviation Shed. Bill and Ian worked on the atomiser project, getting the bracket ready for welding which will be done next week, and also drilling into the frames for the atomiser bracket location (see photo of new bracket with atomisers attached). 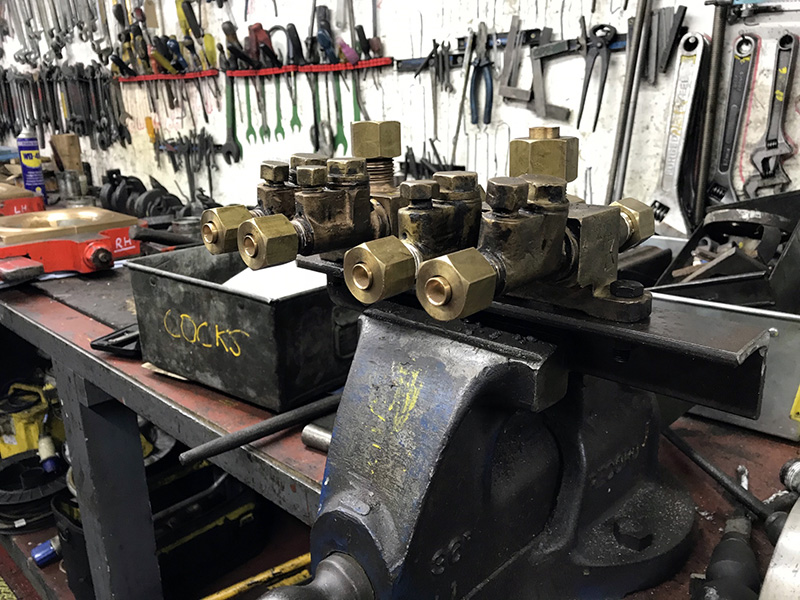 Back to Tuesday and Wednesday working parties from next week.