Ian reports a wet and windy morning on Tuesday, but it brightened up later for Bill Dobson, Nigel Hall, Gordon Wells, Tom Redman, Jon Bradley and Ian himself.

Bill fitted the atomisers with the four new swirls or baffles that had been delivered last week. Then Tom fitted the atomisers back onto the bracket between the frames. When Gordon arrived, Ian set up an airline then Gordon blew compressed air through the four oil pipes which were disconnected from the lubricator. This removed a quantity of oil from each of these pipes at the lubricator end. Then, assisted by Ian and Tom, Gordon got on with altering the pipe work to the righthand atomiser which required annealing, shortening and braising new cones onto the oil pipes. Both righthand side atomiser pipes have now been completed and fitted to the atomisers. The lefthand side was to be done the next day.

Jon removed the new access gate following the work carried out by the NYMR to extend coal storage up to the walkway down to Deviation Shed, shortened it, then refitted it. Please note that the old access gate is now locked off. Access to Deviation Shed from the MPD is now only through this new north side gate near the fitters/cleaner's store. 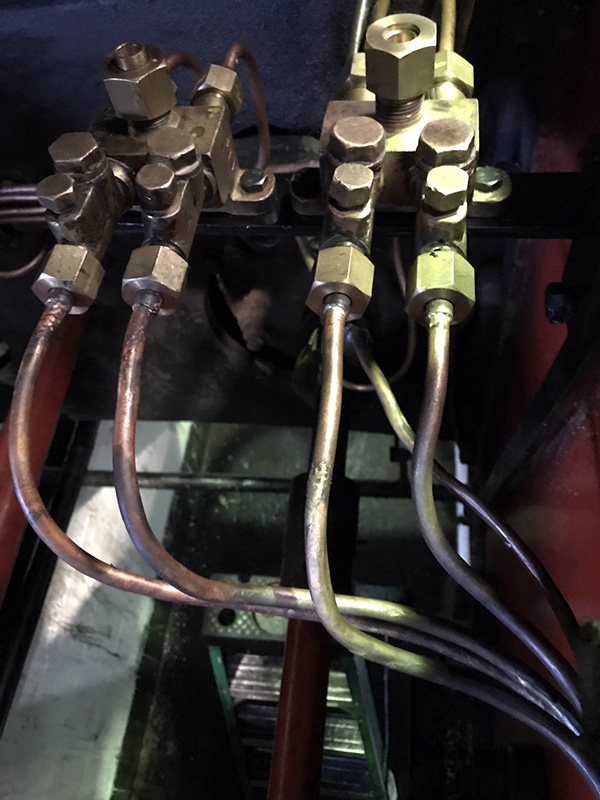 With Terry in the team, he carried on where Gordon left off the previous day, annealing, cutting, fitting cones and braising them onto the lefthand oil pipes(see photo of atomisers with pipes fitted). Steve made and fitted a new clamp to secure the lefthand side of the atomisers feed pipes. After completing this job, Terry started on the larger steam delivery pipes which required larger cone fittings. Again, these pipes were fitted with new cones which were braised on. Afterwards, Bill and Ian assembled the new steam delivery pipes on the underside of the locomotive along the side of the vacuum pipe and fastened them temporarily with cable ties. A few more pieces of the steam supply pipe will be made next week. Bill is going to order a new manifold valve as the one we have is only a PN 20 and we have been told we require a PN 32 valve. Bill and Trevor progressed making parts for the drop grate, with Bill struggling to get through the fire hole into the firebox and down to the ash pan area to check and fit the parts. By the end of the day Bill was back inside the ash pan, and with Ian assisting, a final fit of the equipment was carried out. All that is required now is some welding, which will have to be done next week. A small skinny welder required!

On Monday 28 February, Bill and Ian will be in attendance to witness the cold exam on the Q6 with the Bureau Veritas inspector. The J27 is due to have its hydraulic test on the same day.