Ian reports that Monday 28 February was a dull day at Grosmont with Bill Dobson and Ian Pearson in attendance to witness the boiler cold exam of the Q6 and J27 by the Bureau Veritas boiler inspectors . All boiler doors, plugs, safety valves and pressure gauges, as well as both boilers, were examined and successfully passed the inspection.

The start of the new month on Tuesday turned out to be a very cold bright frosty morning at Grosmont with Bill Dobson, Nigel Hall, Paul Jameson (who brought a delicious lemon icing sponge cake for us all), Ian Pearson and Chris Lawson in attendance.

Bill and Ian's first job, after consulting with Barry Nesom, was to take the safety valves inner base plates to the machine shop to skim 10 thou off the outer surface. This job was completed within a short period of time, with many thanks to Barry. Bill started rebuilding the Q6 safety valves but had to leave us mid morning due other commitments elsewhere. Ian carried on rebuilding the front and back safety valves, ready to be fitted the next day. Paul completed a couple of cab jobs, including fitting the vacuum gauge, boiler and steam heat gauges, then later fitting both gauge frame components (see photo). 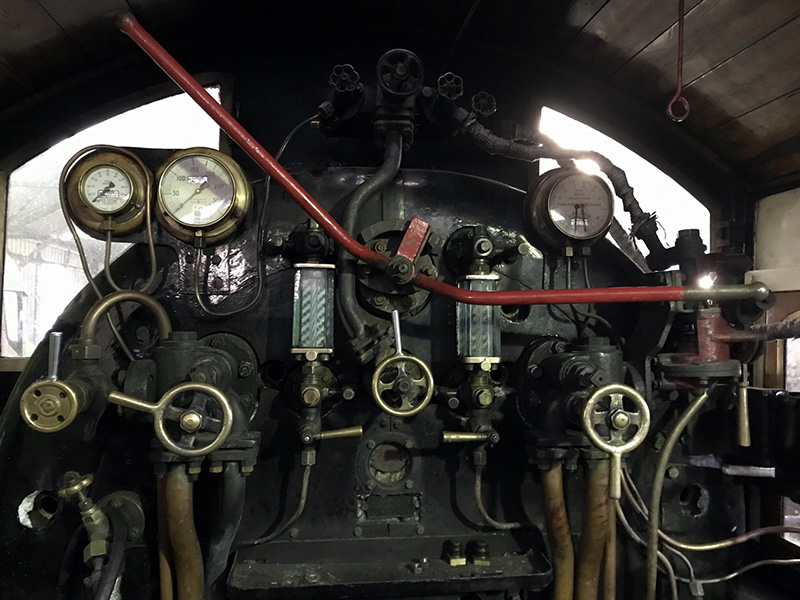 When Chris arrived, he was sent down the pit (I know my place!). The narrow channel inside the inspection pit fills up with debris over time and causes the water to build up in the middle. Chris did a great job cleaning all the sludge out and removed it to the ash tip in the MPD yard. Later Chris and Paul measured the circumference of the smokebox seal which is 15 feet 6 ins - Paul turned it metric and suggested we say 5 metres, giving us a bit to play with. They also found the smokebox door bar already fitted, and secured the door. Chris also patched up the Q6’s back sheet which had quite a few small holes.

Nigel, after giving the Q6 driver and fireman seats a clean, retreated upstairs to make some room and set up the Workmate bench. He then varnished the four J27 cab windows on one side only, leaving the other side to be done next day.

Ed got the stove going before Ian asked him to go around the site and pick up bits of broken wood, as there were lots of short pieces all over the place ideal for lighting our stove. Ed came back with a huge amount. Then he spent most of the day painting the inspection pit walls and got about half done. With Ian assisting where required, Bill and Trevor spent most of the day working on the drop grate mechanism which needed a more substantial bracket making and the operating bar altering and welding. Poor 'old Bill' was in and out of the firebox several times as a bit of trial and error was involved! After Trevor had annealed some copper pipes, which were needed for another job, Bill explained what was required to make the new bracket. A piece of 1/2" plate was found in the scrap bin, and Trevor marked out and cut out the required pieces, dressed them up, and then welded them onto the original bracket, making it much stronger. Trevor also welded the modified operating rod which will be connected to the new bracket later. After Ian had shot blasted the new bracket to tidy it up, Bill went back into the firebox to assemble the various parts - but there's always something stopping the job. On this occasion, the bolt was too short, and the metal arm that connects from grate to the top of the bracket was too thick. Even after grinding some metal off the arm and another trial fit, it was still too tight, so it was decided to call it a day and start again next week. Meanwhile, the Q6 safety valves were fitted by Paul Jameson with assistance from Ian .

Gordon came in and got on with the atomiser pipe work which involved the fitting of 1/2" steam delivery pipes to the atomisers and the tee piece which will be connected eventually to the main 3/4”steam delivery from the cab manifold. This job required some skilful bending, then brazing fittings on the pipes, and connecting up to the atomisers (see photo). 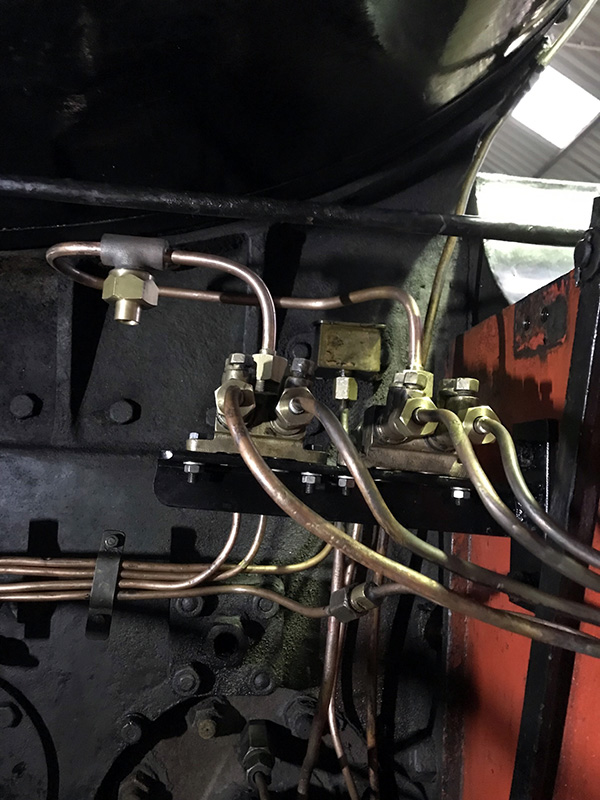 Later Steve and Paul built up the J27's safety valves. These are now stored upstairs in No 8 bay. Steve also cleaned both of the J27's gauge frame protectors and the fittings. These are also now stored upstairs in No 8 bay. Nigel completed varnishing the other side of the J27 cab windows. He also cleaned and painted the handrail bosses that fit inside the cab when refitted.