Gordon worked on the new 3/4" copper pipe which will supply steam to the Q6 atomisers. Lots of work measuring, cutting, heating and bending to shape, along with numerous trial fittings. Bill and Trevor continued with the drop grate fittings. After some tweaking, Bill got the drop grate working, although some welding is still required inside the ashpan.

Wednesday was a cloudy cold morning but warming up later on during the morning. Present were Bill Dobson, Nigel Hall, Ed Bolam, Terry Newman, Ian and a welcome return by David Potter.

Terry continued with the steam supply pipe work from where Gordon left off the previous day, and, after some consultation with Bill, on the route of the pipe after Ian suggested it should be moved to run alongside the steam heat pipe rather than on the vacuum pipe side. With Bill's assistance, Terry moved the 3/4” copper pipe over. Some of yesterday’s pipe work had to have some slight alterations as a result, but it was then fitted to the atomisers (see photo). There is still a lot to achieve though to complete this pipe work to deliver steam to the atomisers. David tested the cylinder lubricator and checked it was delivering oil to the cylinders and valves satisfactorily via the test cocks. He also checked out the spare silvertown pump. This pump was rebuilt, and with a bit of rectification, to get it working again. The pump is now in a plastic box with some spare parts in the upstairs cupboard labelled Spare Silvertown Pump. 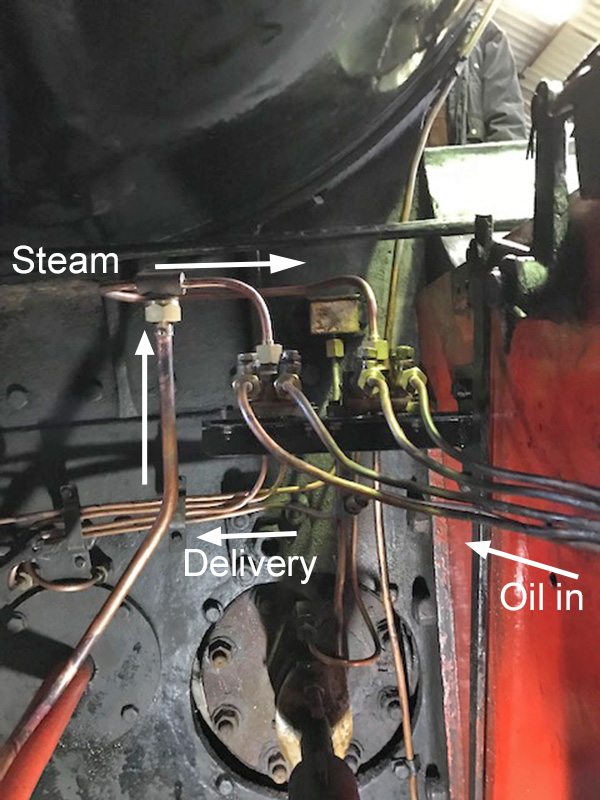 Ed and Ian fitted the Q6 engine and tender and steam heat pipe and also the injector caps. Tom Lee, the NYMR junior boilersmith, fitted all the Q6 plugs and some of the mud hole doors, and will complete fitting the top doors today (Thursday) when the Q6 is moved down to the MPD for the remaining fitting of doors and fusible plugs. Also, the boiler and tender are to fill and a check round made before a warming fire is lit ready for a steam test tomorrow (Friday). Bill and Ian will be in attendance.