As I was only too well aware, Tuesday was a dismal grey day at Grosmont after last week's Spring sunshine, with thick cloud on the tops of the moor road from Pickering. The enthusiastic, full of energy, team that day was Bill Dobson, Trevor Wilford, Gordon Wells, Chris Lawson (yes, I was late again!), and Ian Pearson.

Chris who arrived late morning, cleaned the two left hand display cases on the north wall of Deviation shed before lunch. The other four will be dealt with in future weeks as part of improving the appearance of the building for visitors. After lunch he gave the J27s drawbar and safety links a coat of black gloss.

The weather was even worse on Wednesday - a wet cold day with rain, hail and snow. Very Spring like! The enthusiasts that day were Bill Dobson, Steve Hyman, Ed Bolam, David Potter, Nigel Hall (now recovered from Covid), Jon Bradley and Ian Pearson.

Ed, Ian and David fitted the J27 drawbar and safety links, but please NOTE, the split pins were fitted but not opened out. The main pin under the tender has a piece of plate fitted but there was some doubt as to whether it was the correct one as there is another plate in a plastic box inside the tender locker. This may fit in the same place, so will be discussed with Chris Henwood. The drawbar nut was tightened, but not fully, with the cotter slot just appearing into view. This was done using the large Q6 ratchet with Ed and Ian pushing from underneath and Steve on the rope outside. David brought the J27 ejector back from the MPD to Deviation workshop and serviced the valve heads and seats. There was no point in fitting the valves back into the ejector body until the damaged seat is removed and a new one made, which will hopefully be done next week. 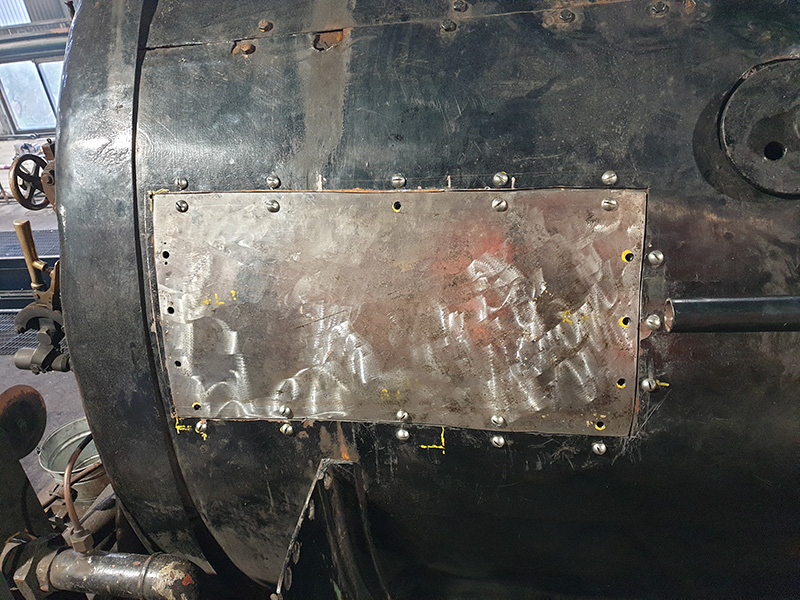 Nigel and Steve worked on the J27 cladding sheet all day. The attached photo shows the state of play at the end of the day. If there is a need to access the stay heads over next few days then the screws can be removed from the new plate and it lifted out. Work still to be done includes fettling a few holes in the plate using a file or burr to get screws to fit; attaching the LHS crinoline to the plate (not to the existing cladding); removing the plate then prime, undercoat and gloss appropriately; and, finally, store it ready to attach after the steam test.

NYMR services are due to start on 4 April.