An even longer report than usual this week,from Ian Pearson and Nigel Hall, reflecting the efforts to get our two locomotives ready for traffic as soon as possible now that the NYMR operating season has started.

On Tuesday, it was a mild, cloudy, breezy, day with an odd smittering of rain at Grosmont for Bill Dobson, Steve Hyman, Nigel Hall, and Ian Pearson.

Initially, it was thought that a stop had been reached with the J27 and there was just the matter of fixing the leaks in the new atomiser system to do on the Q6. Bill stayed at home to wait for the post, which brought a parcel from Barry Gamble to help with the job. He was delivered a steel conical male and female grinding device to rectify the brass cones which were leaking water under pressure, and was required to grind out the inner and outer brass cones to get a water tight seal. However, because of a mega shunt in in Deviation Shed, it was late on Tuesday when Bill got started, and not a lot of progress was made.

The mega shunt action started about 9.30. Lucie and the Q6 were then pulled out of No 7 Road and parked outside Deviation Shed. The smokebox door seal was given a coat of grease by Steve just before the shunt.

After lunch, Lucie was put to the rear of No 7 Road in Deviation Shed with the Q6 in front.

Also on Tuesday, the Defibrillator was given its monthly check by Ian Pearson, who also had word with Luke Unsworth regarding the roof repair. He is still waiting to hear from the transparent sheet manufacturer about a replacement sheet - no progress.

So to Wednesday, a cold blustery day with the occasional heavy shower, with Bill Dobson, Nigel Hall, Colin Smith, Ian Storey, Jon Bradley in the afternoon (after his diesel turn to Whitby with the Class 31), and Ian Pearson.

Bill continued working on the leaking Q6 atomiser copper pipe joint leaks with assistance from Ian Pearson. Very frustrating for Bill, grinding out with his new conical male and female grinding tools, then blueing in, refitting and pressurising again and again, and still getting leaking joints mainly from the one below the atomiser. By late afternoon Bill did get it to seal. He also adjusted the main feed valve in the cab from the manifold as it was pointing downwards and in a poor position to operate. Duncan Jackson, an MPD fitter, had done a check round the Q6 and drawn up a list of small jobs that needed rectifying. Two of those were the left and right trailing side rod cotters and retaining cotters. Ian Pearson removed the righthand side retaining cotter, which was very slack in the slot, and set about making a new one. A time consuming job, but eventually he got a new one made and drilled a hole for a split pin and fitted it securely. Ian Storey visited for some private business at the MPD, but after lunch he offered his assistance. So, he removed the lefthand cotter which needed elongating, and a new retaining cotter making, both of which which Ian did and fitted them securely with a split pin at the rear . These jobs are quite time consuming. While Bill was underneath at the front end, he tightened up a nut on the righthand piston follower which was on Duncan's list. When Jon arrived just after lunch, he was given a job of securing the vacuum ejector pipe around its two brackets. Although it would not fall off, it was quite slack within its two brackets, so Jon secured the back one with a timber chock and the front one with a rubber belt. Another job that Duncan completed was to fit some new mesh around obvious gaps on the smokebox spark arrester. 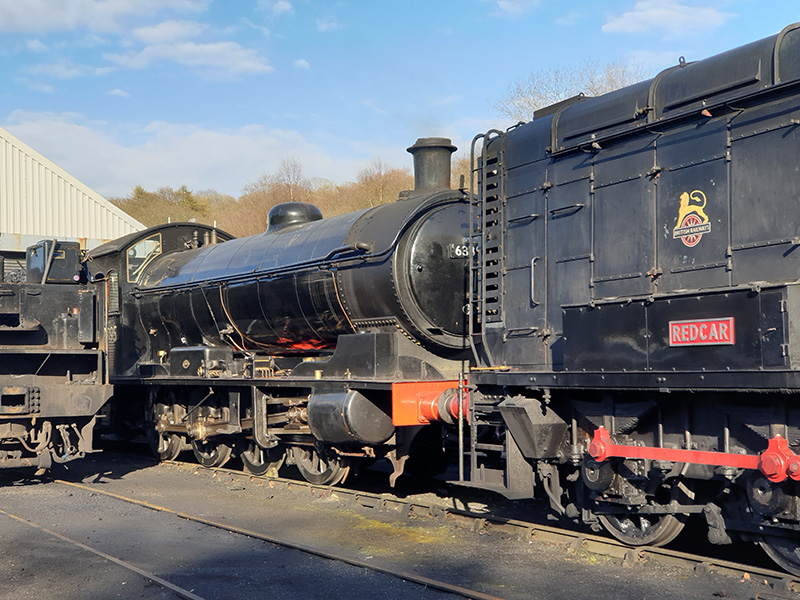 For the Q6 therefore, next week should be largely tidying up before the loco can go into traffic – we hope. At tge end of Saturday, the Q6 was outside with a warming fire, awaiting a steam, test on Sunday.