With Ian absent from Deviation Shed for the next few weeks following an injury to his leg, this week's report has been compiled from notes provided by Bill Dobson, Nigel Hall and Chris Henwood for whose help I am most grateful. Nevertheless, this report inevitably takes a slightly different form to the usual.

On Tuesday, Nigel measured the window runners on the J27. One window is so loose that it falls out of the runners and all need to be replaced. Meanwhile, the insurance boiler inspector was present for the J27 in steam test (see photo), which was successfully carried out. However, the ejector was still causing problems. 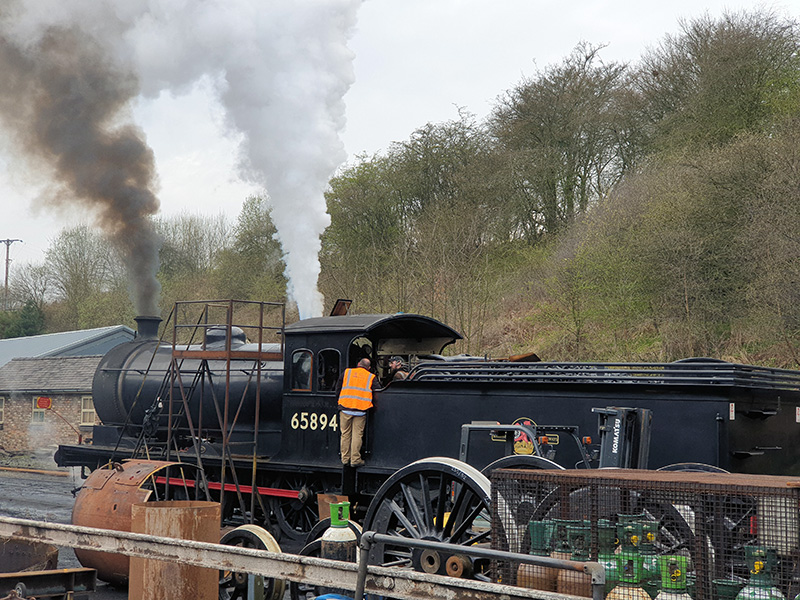 Wednesday saw Ed Bolam and Arthur Jenkins made a start on countersinking the J27 cabside holes using a mag drill, while Chris Henwood got some engineers blue on the small ejector valve/seat, and found very little contact between the two. He then cut the seat and lapped both in with the hope that the ejector problem will now be cured. Dave Cholmondley's battle with the steam heat valve was settled by fitting a new set of pipe fittings, which held up for the exam and proved steam tight. It was lucky finding just the right parts at very short notice. Arthur also offered to take away the slacker pipe valve to be machined at Hopetown and return it next week. All being well, this will mean that, pending a steam test to prove the ejector, and a bit of time adjusting the brakes, we should have an engine ready for traffic.

Away from Grosmont, Nigel Hall spent Wednesday at the timber merchants in Richmond to source some timber for the new runners, and, in the absence of suitable dressed timber, managed to find something close in rough sawn timber. After some carpentry in his garage, he spent Friday at Grosmont and replaced both sets of lower window runners. They may be a bit wide, but it will be easy enough to take off and reduce the width if it proves to be a problem in practice (rattly windows).

In spite of ian's absence, and the imminent return to traffic of both locomotives, working parties will continue on Tuesday (19th) and Wednesday (20th). Even if there is not much work to do on the locomotives (but there will always be something by their very nature), then we need to tidy up in Deviation Shed and make it both safe and respectable for visitors so they are encouraged to drop money in the collection box. Chris Henwood and Bill Dobson will be the usual contacts if you plan to attend.