Tuesday was a glorious sunny, warm day but very blustery for Chris Lawson who was on duty at Deviation Shed, with Bill Dobson calling in after lunch.

After opening up and getting some milk for the tea, Chris completed cleaning the display cabinets inside and out, and also did a small amount of further prep work on the frame of the main Deviation Shed sign on the running line side of the building. There were lots of visitors to chat to and one possible new member as a result. Bill took a part of the Q6 blow down valve to the MPD machine shop for some light machining. The MPD staff reported the Q6 smokebox door will need some repairs. This was to be investigated on Wednesday after the locomotive had cooled down, as it was being taken out of traffic until the weekend, to ensure it has enough days left before its wash out is due, so that it is available for the Patrons trip on the 13.30 ex Grosmont on 21st May - moors fires permitting!

During the day, the Q6 took the 10.30 to Pickering with the Class 37 banking and then the 14.30 with the Class 37 as pilot. The J27 was stood on No 5 Road in the running shed, not in use, but was moved in the late afternoon to No 4 Road for spark arrester repairs the next day.

First off, there was a report from the MPD that the left leading underkeep tray on the Q6 had a piece of casting broken off at the outside lip where the felt packing tucks around the axle box to stop oil running out. It is held in position by a metal cover at the top, secured with two bolts, and tucks into the underkeep casting at the bottom of the underkeep tray. The top cover was removed and a piece of thin plate was made by David, bolted to the top cover and then the cover was refitted. 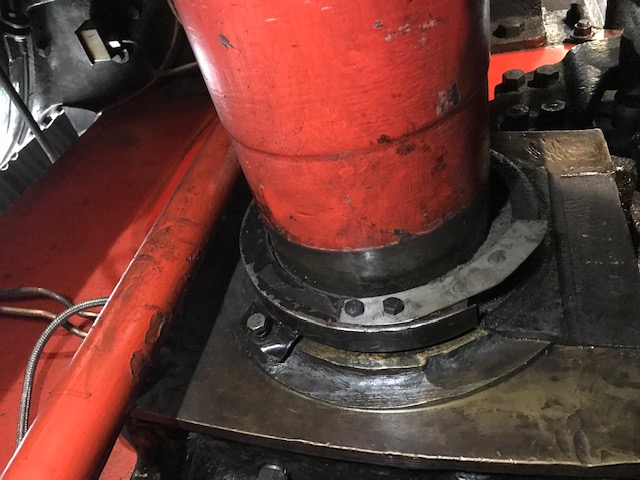 While working under the Q6 Steve found the amount of dirt around all the front area - the frames, springs, axles, motion plate - was unbelievable having only being in traffic for a short period! Ed cleaned both sets of steps which had also got into a filthy condition. Following up the previous day's report of problems with the Q6 smokebox door, it was found that a hole had appeared on the bottom right hand side of the smokebox door which had been plugged with a bolt. Bill and Ian borrowed the thickness testing equipment and did a test on the door and found it to be of variable thicknesses, from 1.8mm to 5.9mm (see photo). Hopefully the repairs will will wait until next winter. 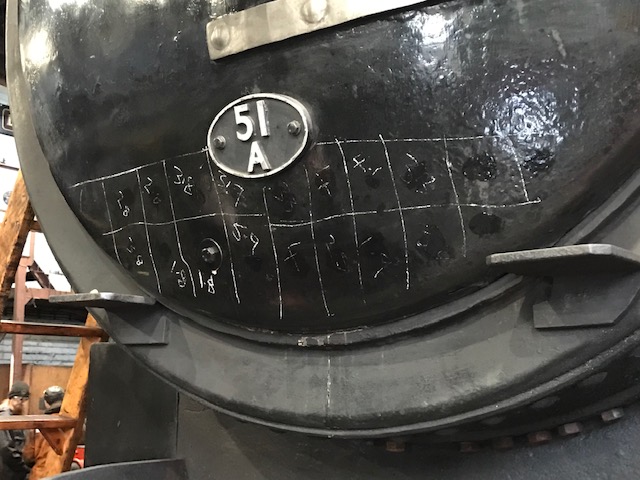 Ed and Ian spent all afternoon lagging the atomiser, steam heat, and vacuum pipes on the Q6, but there is still quite a bit left to complete. More work was done by David and Bill on the blowdown valve, which ended up with David giving it a hydraulic test which proved to be OK. The only job left to do was to weld a stop inside, so it stops in the closed position after operating.

Nigel made and fitted a new bracket to the back of the curved North Eastern Locomotive Preservation Group headboard so that it can go on a locomotive lamp iron.