The Q6 had had a steam test on Monday 6th (D-Day) with a few trips up the head shunt with Mr Charlie Dore at the controls.

It was found that the small ejector was passing by when shut off. After investigation by the shed fitter the small ejector handle was taken off to find that there was no valve head inside. A bit of a mystery! Another valve was found in our workshop but Its shaft was slightly larger than the original. David and Bill measured the recess in the operating handle where the valve fits then took it down to Barry Nesom who machined it to the correct size, then David fitted it back into the ejector. Later Barry came up to our workshop and gave Ian and Steve a master class in sharpening drill bits! Steve spent some time cutting a large bag of rags mainly old overalls into suitable sizes for cleaning purposes. later he sharpened quit a lot of our blunt drill bits.

Another job which was found was to patch up the spark arrester in the smokebox where the ejector exhaust pipe curves up into the chimney leaving a small gap in the mesh. Ian found an old section of mesh, thought to be ex K1, fitted to a frame. The mesh was removed and Bill, who had made a template out of cardboard, then cut a section of the mesh to fit the offending hole. Ian got the dirty job inside a warm smokebox wiring the new piece of mesh onto the existing mesh screen. Nigel spent the day making new headboard brackets as there are a few more headboards to mount on the outside workshop wall. He also tidying around in the workshop with the vacuum cleaner. Nigel and Ian swapped the bench outside with the blue bench from inside. The bench outside is looking rather shabby with the old paint peeling off and the wood is getting wet. When dried, it can be stripped down and repainted.

We did start to put a few items into storage upstairs mainly small items such as spare baffle's and none return valves fittings which are spare from the atomiser build. These are in a small plastic white pots and contents marked on the outside, to be found in the pigeon holes upstairs. Lunch was had alfresco on the bench outside Deviation shed. A lady took some photos of us, as she was quite impressed with the work we are involved.  (See photos she sent me with permission to use.) The lady only lives a couple of hundred yards from me. 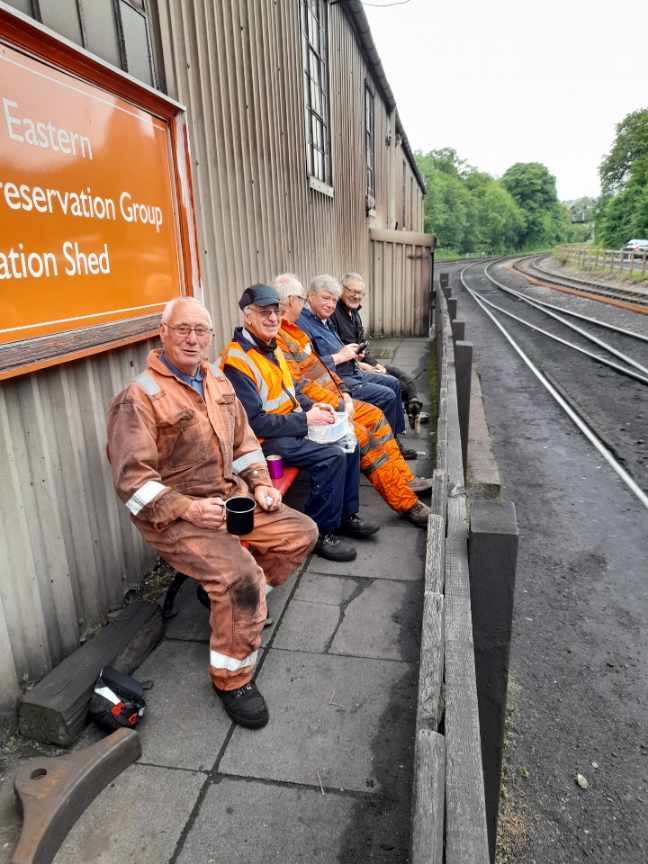 During the afternoon we had a visit from Derek Shorton. He had managed to negotiate the route from the car park to the MPD on his mobility scooter, but balked at the challenge of the hill climb behind the wheel drop, parked up, and walked the last 200m.He seemed bright and cheery as usual, despite his mobility problems.

As far as I know, nothing to report regarding the J27. It was spare engine waiting of duty.

By Friday, both the Q6 and J27 were back in traffic.