Saturday 9 July saw Bill Dobson and Nigel Hall at Grosmont on a hot, fine, day to start removing the Q6 valves to check for any damage following reports by drivers of 'groaning' at the front end. Removing the front valve covers was relatively straightforward, but then the fun started trying to remove the valves. The splitting of the right hand valve from the valve rod after the taper cotter was removed became an unexpected, time-consuming, job. After a lot of heat had been applied, it still would not split, so it was left and a start made on the left hand side. After the removal of the taper cotter it was another struggle, although the valve eventually parted from the valve rod. However, Bill and Nigel only managed to get the valve halfway out. Then it was time to call it a day.

Tuesday (12th) dawned a warm day with patchy cloud and the odd drop of rain for Bill Dobson, Nigel Hall, Steve Hyman and Chris Lawson. Ian Pearson was on a driving turn, working the Grosmont - Whitby shuttle. Another day struggling with Q6 valve removal. The left hand valve was tackled first, and, with the help of a small hydaulic jack, just before lunchtime it was eventually pushed out and lifted on to a stand on the gangway. After lunch, more heat was applied around the right hand valve spindle/valve rod by Chris Henwood, and it eventually  parted company with the valve rod. Using a strop and pull lift attached to the coupling hook on the Standard Tank which was parked just in front of the Q6, this valve was pulled out and put on a stand next to the other one. 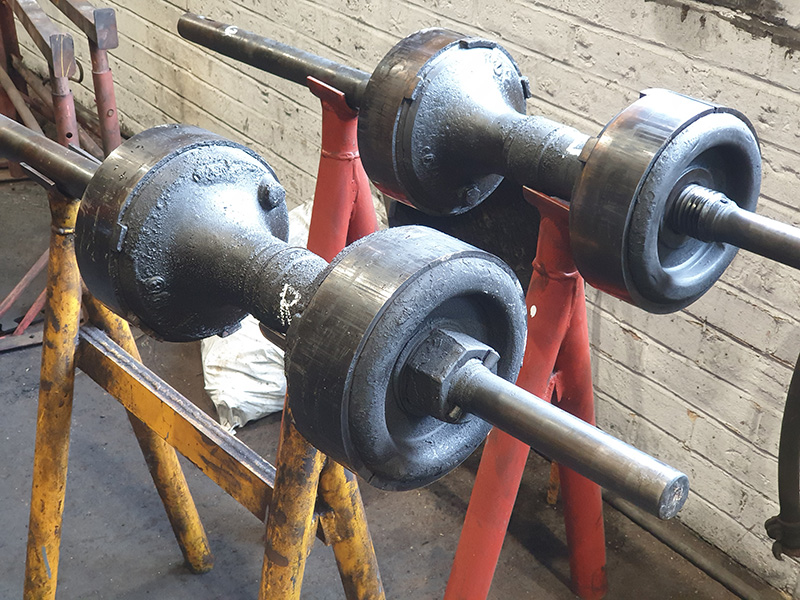 Both were examined and showed evidence of a lack of lubrication but no damage. The retaining nuts were found to be slightly loose however, so the nut cotter pins were removed and the task of making new shims was started. It had already been decided to replace the atomisers, which were found to be blocked preventing oil getting through, and return to the original lubrication system, with the aim being to have all the work completed and the Q6 available for traffic by the end of the week to replace the 9F when it was due its 28 day washout. The atomisers had already been removed, and the bracket on the right hand frame was temporarily replaced (with only one bolt, and needing a new hole to be drilled for the second bolt) by one to hold the non return valves. In the latter part of the afternoon, Nigel spent some time cleaning up the J27 cladding sheets and preparing them for repainting.

Wednesday (13th), a slightly overcast warm day, saw Bill Dobson and Ian Pearson working on the Q6, assisted by Jamie Ford Haswell from Goole, on NYMR work experience. After lunch they were joined by James Butterworth after his shift working as a carriage cleaner. Bill and Ian spent most of the morning making shims for both valves. Jamie was given the job of cleaning the faces of the valve covers which were coated with hardened steam seal. After lunch the shims were fitted, the nuts tightened up, taper pins cut to size and fitted. Before fitting the valves though, it was realised that there was lots of carbon around the inside of the liners which would make it difficult to fit them. So, James and Ian spent all afternoon cleaning the carbon from inside the liners. While that was being done, Bill was underneath the engine doing a trial fit of the non return valves so as to get the bracket in the correct position. 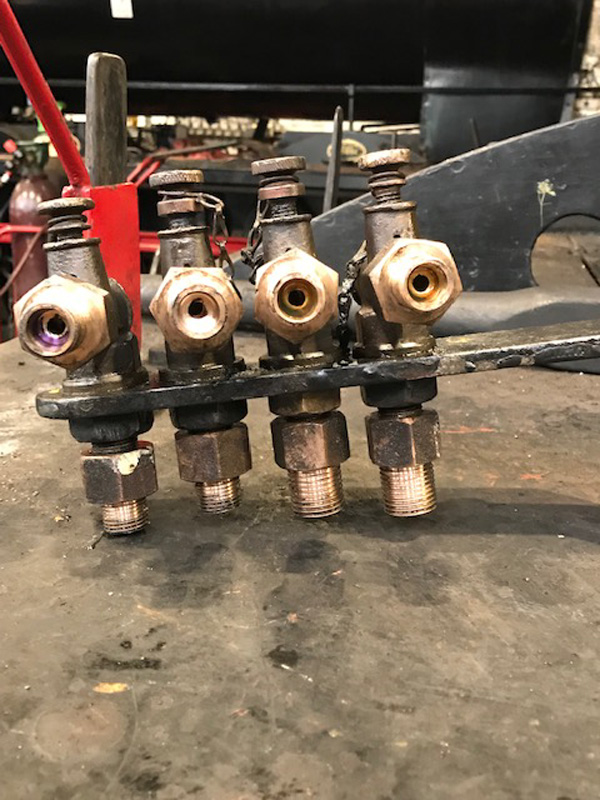 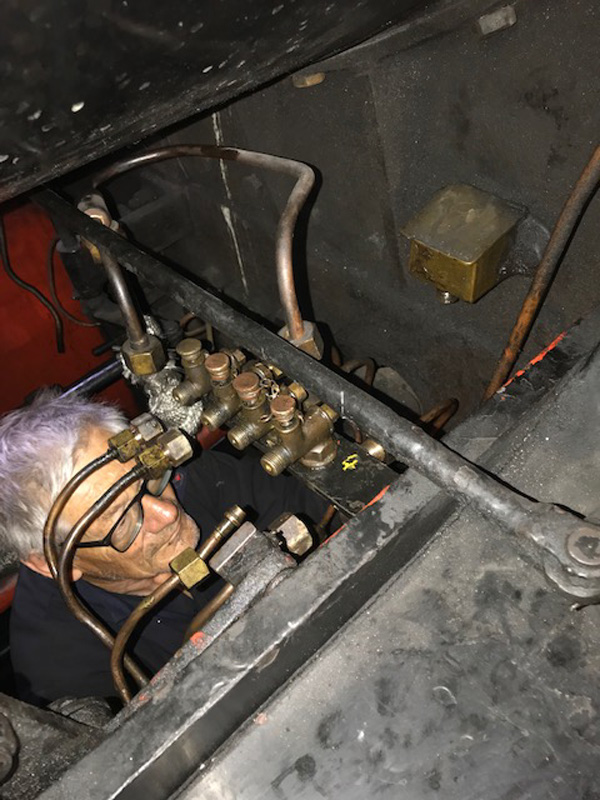 Thursday (14th) saw Bill and Ian back at Grosmont again, along with Jamie Ford Haswell and NYMR volunteer Graham Cooper. The liners were given a coat of oil, along with the valve heads, the transmission jack was brought down from Deviation Shed to assist with lifting the valves, and with assistance from NYMR shed staff, the valves were fitted and coupled to the valve rods, the taper cotter fitted and pinned. Jamie was given a job on the J27 cleaning the boss face of the clack boxes and bottom gauge frames. During the lunch break, Chris Kelley and Andrew Jeffery fitted the valve covers after removal of the oil pipe fittings which were cleaned and annealed. Dougie and Dave Cholmondley then fitted new nuts and washers and tightened them up. 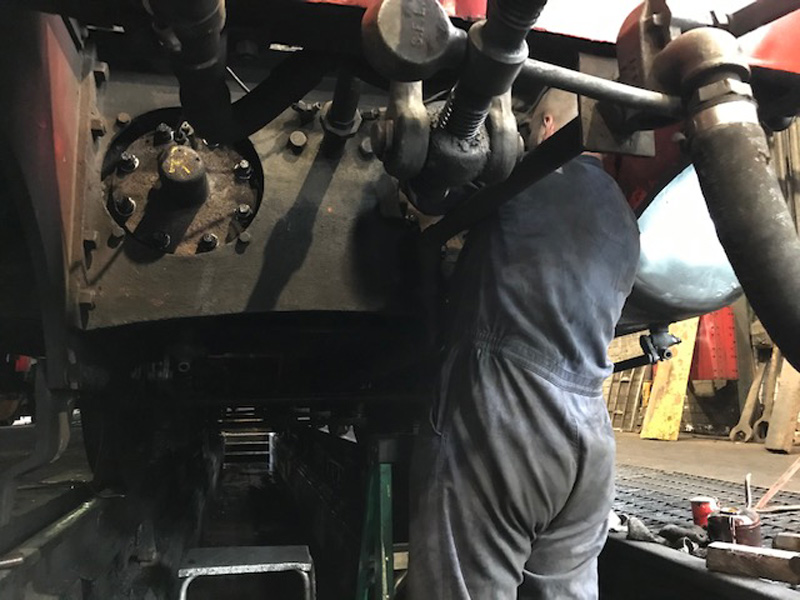 Graham removed the cover under the cylinders which was full of ash and debris. This was cleaned and refitted. A warming fire was lit during the afternoon ready for a steam test the next day. Later on, Bill and Ian set up the Mag Drill inside the frames to drill out the second hole for the non return valve bracket. Bill then tapped the hole with a 5/8" Whitworth tap before it was 6pm and time to go home.

Friday (15th) saw patchy clouds and some showers, but Bill and Ian were back with the Q6 in steam for the first time in weeks. Bill concentrated on fitting the non return valve bracket and pipe work (see photo) with Ian assisting and oiling the engine. Bill also removed the top steam fitting that delivered steam to the atomisers and blanked the pipe off. Later the engine was pulled outside of No 5 Road with the 08 shunter where Bill had to complete the oil pipe fitting by crawling underneath. The engine was examined by the shed staff for a fitness to run exam - vacuum, safety valves etc. After Bill had completed fitting the non return pipe work, the Q6 was given a couple of runs up the head shunt and all seemed to be fine. Only a couple of runs could be done though because a mega shunt was to be caried out to get the B1 and its support coach ready for its journey to Pickering New Bridge in the evening. The Q6 was then put back into the rear of No 5 Road and secured, with the fire pushed forwards and boiler filled .