We have worked on the K1 at Carnforth for 9 days since the last report. While you do not normally get a weather report with my updates it was ridiculously and uncomfortably hot for most of the time we worked at Carnforth late May/early June so my thanks to those taking their time to work on the K1 is particularly sincere on this occasion.

On the boiler/firebox, all of the throat plate/barrel rivets have now been removed and burning around the stay heads to the LH outer wrapper has been completed. Three quarters of the RH has also been done. The method for this has changed as the chisel bit for gun used to knock the heads off broke and replacements are no longer available of that particular type. After trying burning round a few full heads, which took much longer than just going round the stays with the heads removed, we tried cutting the heads down with a cutting disc to reduce the size then burning. This worked well and was just as quick but much less physically demanding than using the windy gun.

More needle-gunning of the barrel interior has also been done - this particular job is now very close to completion. The regulator rod has now been removed (we had previously only moved it enough to allow us to get in and out of the boiler) which has allowed the removal of two "necked" studs from the regulator stuffing box pad/boss. One of these has been replaced from stock and the other ordered.

On the mechanical side the LH injector has been removed  as has the loco brake weigh shaft (which is heavier than it looks) and the loco steam brake piston has been cleaned and passed to contractor Mike Hirst who will manufacture and fit a new little end pin after reaming the holes true. The brake piston will also require new rings. We have also had a couple of communal frame cleaning sessions - which everyone seems to love!

Work on the cab roof continues. The areas too corroded to save have been replaced - we got West Coast's John Massingham (Mass) to do most of the welding (see photo) as he is much better and quicker at it than me. Other than that rust removal/treatment and priming of the outer face of the roof is almost complete and the whistle linkage cross shaft (normally fitted to the underside of the cab roof) has been refurbished by Mike Hirst under contract and is ready for trial fitting. 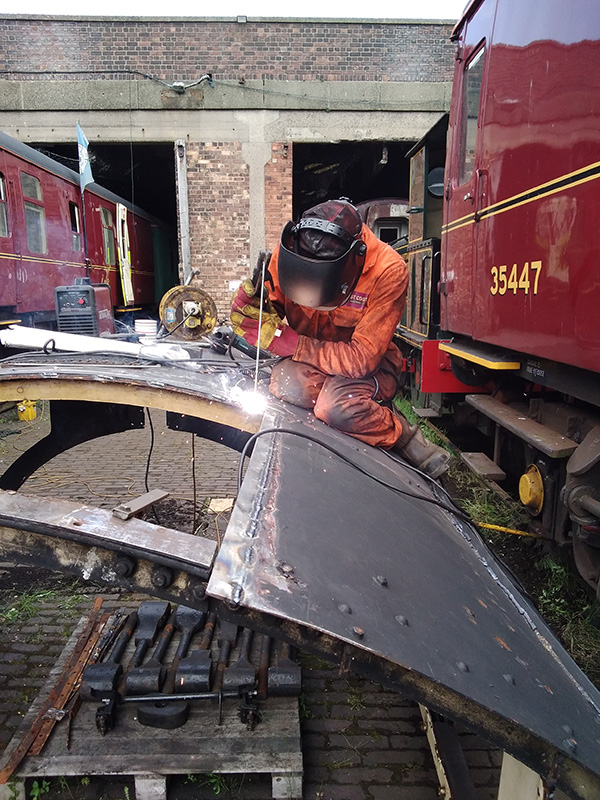 Many thanks to Angie Buxton, Lizzy Fielding, Steve Gibson, Robby Ellis and Frank Hryniewicz who have all worked on the loco since the last update.