A cool, cloudy, drizzly morning at Grosmont on Tuesday, but the sun shone later making it a very pleasant day, with Bill Dobson, Paul Jameson, Nigel Hall, Chris Lawson and Ian Pearson, along with help from Robin Savage who was on a one week NYMR work experience course from Rye Hills Academy, Redcar.

Bill removed the last section of the Q6 steam supply pipe from the manifold valve to the floor level. This section is now with the others removed last week, in Deviation Shed near the stove. The Q6 itself was in steam and had a test run to Goathland, with Chris Cubitt driving, to test the lubrication system. All was fine, and we were told that it ran like a dream.

Wednesday was a lovely fine day with lots of sunshine. The NYMR Junior Volunteers were in attendance at the running shed in the morning, busying themselves cleaning the Q6 (see photo). 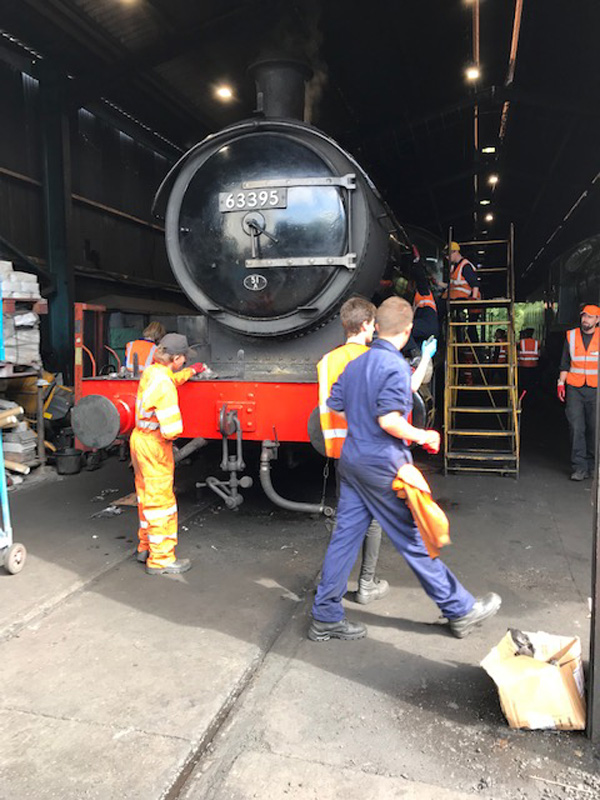 Steve Hyman, Nigel Hall, Paul Jameson and Ian Pearson were present from the Group, and later on in the morning, Robson Hewitson arrived with the intention of having a chat with Bill - unfortunately though, Bill was having a day off.

The Q6 had a warming fire lit in the afternoon as it was to be on today's (Thursday) diner to Pickering. Ian was talking to Robson later on during the afternoon regarding the manifold valve which supplied steam to the now removed atomisers. Both thought that the valve could be accidentally opened, or could vibrate open, and leak live steam as there was no cap on this valve -  although the valve was shut off, the operating wheel had been removed. So, on grounds of safety, it was decided to replace it with the old valve which had been on the manifold for many years before the atomisers were fitted.

A start was made, at last, on replacing the Deviation Shed roof panel, blown off during the storms earleier in the year.