Updated 9th Feb. A week full of progress toward seeing the Q6 steam again. On Wednesday we had our cold boiler exam by Ron Gregory of Bureau Veritas. No problems were found.

Mike Oliver continued his methodical progress reconditioning the cab valves. The steam heat valve was refitted by Mike after Bill Sharp overhauled the valve at Hopetown. Ian Pearson and Nigel Hall refitted the left hand cylinder cladding with a new finishing strip on the leading edge. Derek Shorten continued his deep clean of the frames. We then prepared to refit the cylinder covers by annealing the copper sealing rings and getting the left hand cover in position for the Saturday team.

On Saturday both cylinder covers were put up by James Pearcy and Alan Hardie assisted by Brian Armstrong. The team then moved on to fit the main intermediate coupling which involves putting up under the tender a number of very heavy components.

Good teamwork ensured it was completed safely and leaving enough time for a cup of tea and a piece of cake provided by Mrs Andy Lowes.

Andy Lowes himself confirmed that the leak on the hydraulic cylinder of the steam reverser was at the trailing cover gasket. He then removed the old gasket. The photo with this report shows the cramped and inaccessible location of the reverser. Thanks Andy for putting up with this very awkward job over a number of weeks. It is planned to fit a new gasket next week.

The left hand piston valve was assembled by Neal Woods. This valve has one of the new valve rings. The assembly was checked for dimensions and to ensure the rings are free enough to float in the valve chest bore without excessive end float.

Bad news today was the absence of our regular working party attendee Hutchy the robin. Even though there was evidence he had been in Deviation Shed since last seen on Wednesday, that being the custard cream left out for him to put him over until Saturdays working party had been well pecked. Perhaps he just got tired of custard creams, however where ever he is we wish him well, especially James as he had built a special bond with our feathered friend. 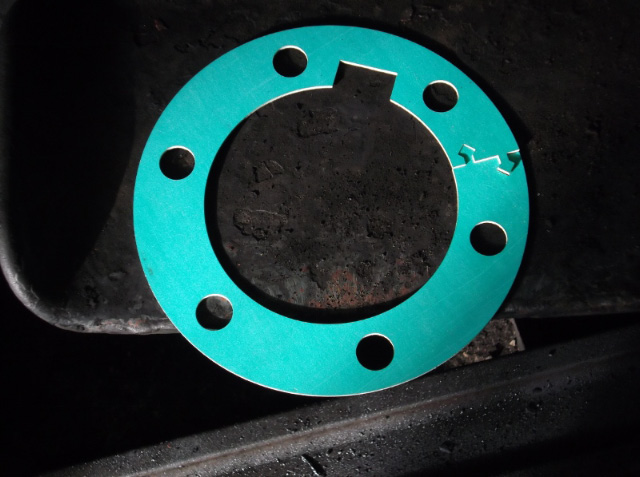 Unfortunately due to the weather only one working party member made it to Grosmont on Wednesday, the "ice road truckers" abandoning their journeys between Lockwood Beck and Freebrough Hill. The sensible ones did not bother to set off. Chris Lawson made it from the south and was rewarded with spectacular winter scenery, a class 66 on a ballast train in Grosmont station and 76079 on it's mainline test run.

Saturday things were a little quieter in the station but in Deviation Shed all was hustle and bustle. Neal Woods continued on the assembly of the right hand valve after final assembly of the left hand. The LH valve was put in the engine, covers secured, oil pipe reconnected and the valve spindle connected to the valve gear. Thanks to Alan Hardie, Brian Armstrong and Ian Pearson. Nigel Hall started the long process of touching up the paint work. I fitted the new steam reverser hydraulic lock gasket supplied by Jetline of Thornaby. Thanks to Steve Brown of Jetline for his expert help. I attach a photo of the gasket showing the method of splitting the gasket to get it past the reverser shaft. If it leaks now I've only myself to blame.