On Tuesday night on the way to the Milwall match at the Riverside Mike Oliver called at Thornaby to pick up the overhauled Q6 pressure gauges. They have been expertly overhauled and returned spotlessly clean and gleaming from BKW Instruments of Manchester. We have to thank Andy Wallace for organising this for us. He also got the J72 gauges done by the same company. 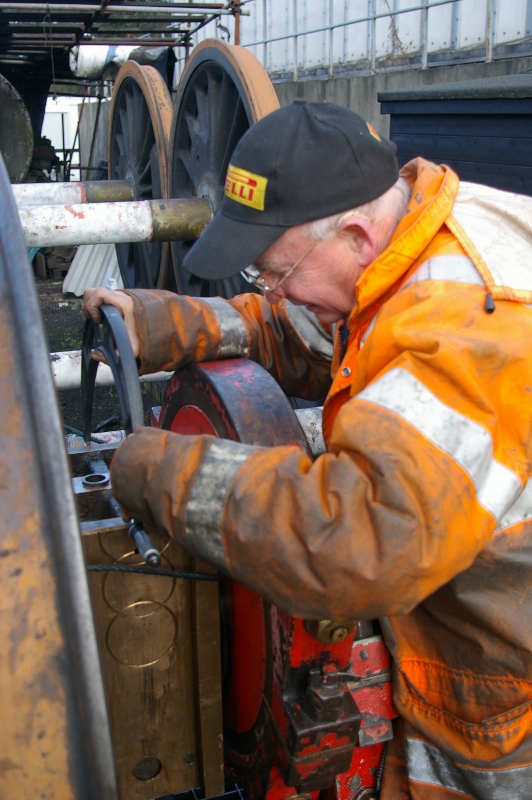 Richard Campbell brought through 7 of the 8 reconditioned side rod bushes. While he was there and with the assistance of other working party members, 4 of the bushes were tried on the crankpins and declared satisfactory. Richard them then measured the assembled driving axleboxes and the horn gap in the frames. Unfortunately it was found that the driving axleboxes require further work. This is very disappointing. So much so I forgot to take photos on Saturday when faced with the task of taking them back off the journals.

On Saturday me and Andy Lowes got the axleboxes off the wheelset and into the company car with the help of some NYMR cleaners. We are getting quite good at this now. Well it is quite easy when you've got Paul Whickham driving the telehandler to pick them up, but we still had to manhandle them across the railway to the car.

Brian Armstrong carried on with the fabrication of the new spark arrester between handing out NELPG membership forms.

We continued with trying the side rod bushes on the crankpins. The loco was moved to gain access to the leading ones as they were hidden behind the crossheads and slidebars. Then we tried on the left hand driving bush.

James Pearcy and Alan Hardie started to repair the grate support which had failed at the front left hand. We will need more material to complete this job. James finished off by fitting some new brass domed head screws on the gauges.