Please accept my sincere apologies for the non appearance of the K1 on the above tour. We are all bitterly disappointed, not least the K1 support crew. 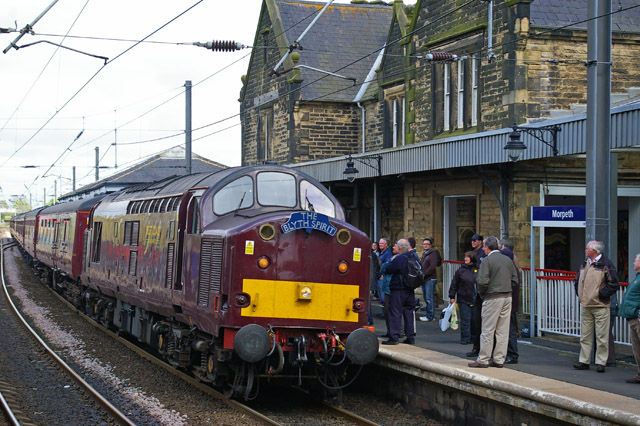 A few words of explanation; the K1 passed its main line fitness to run examination at Shildon on the evening of Friday 7th May without problems. However, whilst the locomotive was subsequently being moved around the yard in readiness for departure on Saturday morning, a steam leak was noticed from the right hand cylinder. At first this was thought to be from the cylinder drain cocks but further investigation revealed that it was coming from the cylinder itself. The drain cocks were removed to allow removal of the cladding which then revealed a longitudinal fracture to the cylinder wall. Our CME John Graham had no option but to declare the locomotive a failure.

This decision was made at 21:30 so it was impossible to notify passengers. However, at such short notice NELPG had no option but to allow the railtour to run. Later that night efforts were made to secure one of Ian Riley’s Black Fives, both currently on the NYMR, as a replacement but at that time of night – approaching midnight - it was simply not possible to get the necessary approvals and paperwork in place. The decision was therefore taken to proceed with the train diesel hauled throughout.

However, this had further complications because two of the coaches in the formation were vacuum braked only and to provide two diesel locomotives to top and tail meant that they both had to be dual braked; unfortunately no other vacuum braked diesel was available so the train had to be worked by 37516 on its own. This meant that at reversals the locomotive had to run round its train, hence the need to go to Grangetown for this purpose. More significantly, the need to run round the train twice meant that it was not possible to go to North Blyth.

Furthermore 37516 is not fitted with an electric train heating supply, and whilst the train was pre-heated prior to departure from Carnforth, it was expected that the K1 would supply steam heat from Middlesbrough. Without the K1 there was sadly no train heating throughout.

Fortunately, thanks to the efforts of West Coast’s Operations Manager, WCR Control and Network Rail’s York Control, at very short notice it was agreed to re-route the train up the Durham coast to Newcastle, and in doing so allowing a longer break in Morpeth for passengers to visit the town, and back via the Ferryhill – Stillington – Norton freight line (though it transpired that despite Network Rail’s endeavours there was no signalman at Norton West so the train had to run via Darlington. Nevertheless as a consequence of these changes passengers had an earlier arrival back at joining stations.

Meanwhile, by the time the railtour arrived back at Carnforth NELPG engineers had already stripped down the K1’s cylinders for closer examination by specialists. This will facilitate a detailed assessment of the problem so that a repair can be agreed and affected. This is likely to be an expensive task and we hope that the proceeds from the railtour might help to go towards this cost.

Looking ahead, it is hoped that the K1 will be able to take up its role working the Jacobite at Fort William as planned, and looking further ahead we will examine the possibility of re-running the railtour with the K1 to North Blyth on the locomotive’s return from Scotland in the autumn. If so, we will make announcements to that effect.

In the meantime, I hope that the above explanation goes some way to alleviating your undoubted disappointment on the day. Clearly this sort of failure, whilst uncommon, cannot be predicted. I believe we took the best possible course of action under the circumstances and very short notice and trust that you understand.