On Wednesday the right hand horn liner was carefully dressed to give the clearance on the axlebox that we need. Chris Lawson displaying his talents with a file and inside micrometer. By Mid-day the job was completed and the shed were notified that the loco was ready for the wheeldrops. It is planned that the Q6 can be reunited with it's driving wheels next Wednesday.

Ian Pearson has made some trimmings for the driving axleboxes and tried them for size. Ian is now cutting new oiling felts for the side rods. 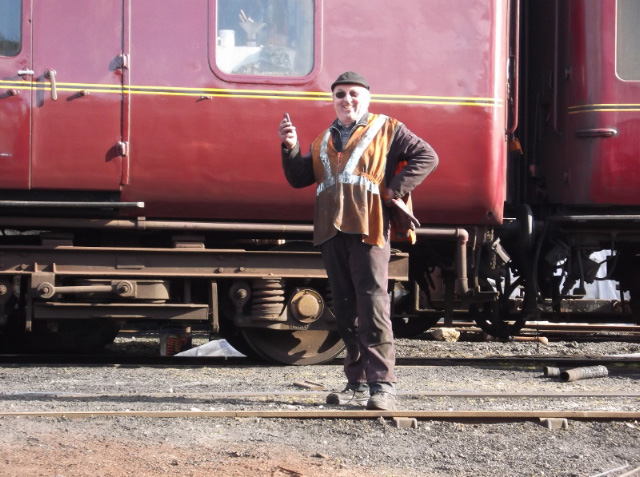 Ian and Brian Armstrong cleaned off and prepared the intermediate steam heat, water and vacuum hoses for re-coupling. Some new seals were required. The loco was coupled to the tender with most of the team helping with the final tightening of the main coupling nut. Unfortunately the shed can't fit the full loco and tender in the wheeldrop due to the B1 being left up there so on Saturday it had to be uncoupled but with everything being clean and greased it came apart relatively easily. On Saturday Les Harper went round the tender and replaced worn grease nipples and gave it a good greasing. 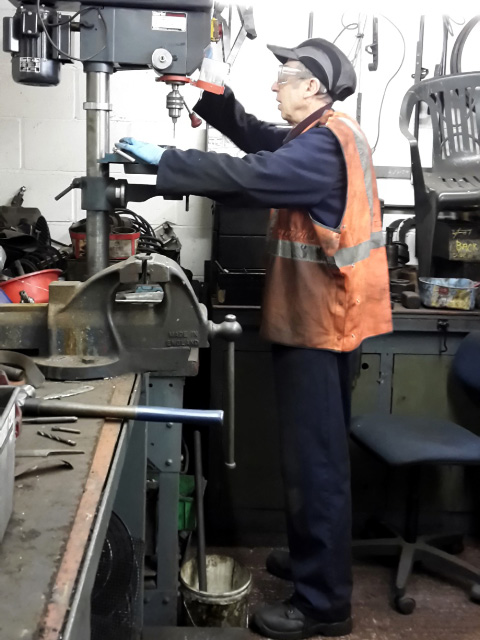 Derek Shorten has checked round the boiler washout plug holes and door holes and made sure they are clean after the winter so they are ready for closing up. 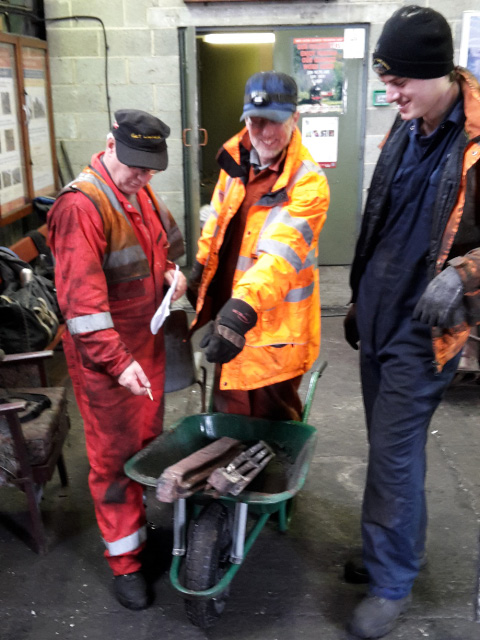 The grate was fitted last week but needed a couple of additional bars. Ian searched round the shed and found a couple so the grate is now complete, though one of the side bars is cracked and we will get a replacement in time. 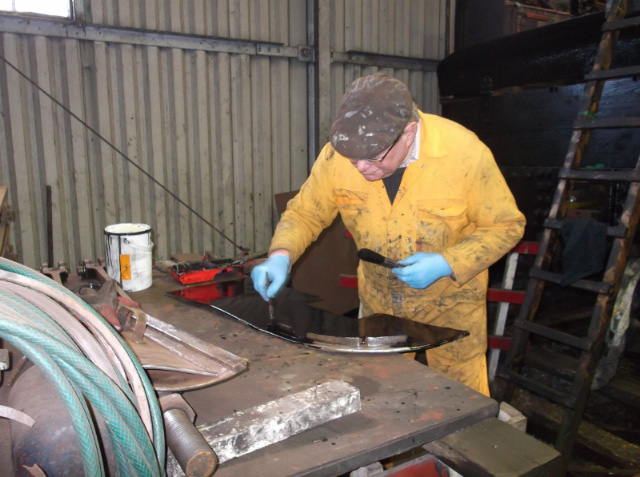 Nigel Hall continued painting and the firehole heat shield, which was looking very battered is now looking like new. In the cab Mike Oliver continues his renovation and is now looking at the woodwork on the sandbox tops. 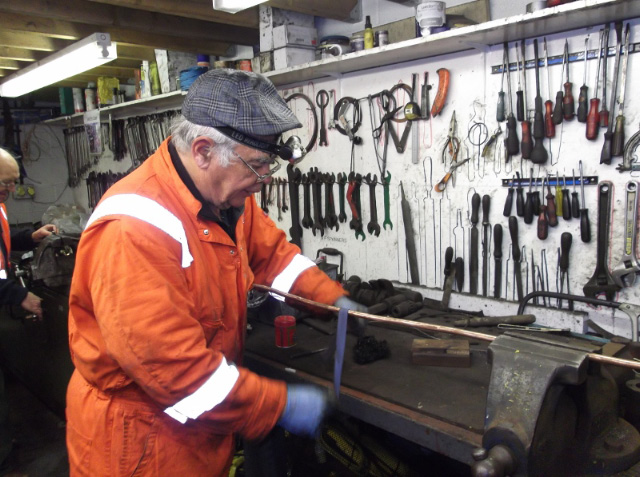 Also on Wednesday the left hand rods were reassembled and cotterred. 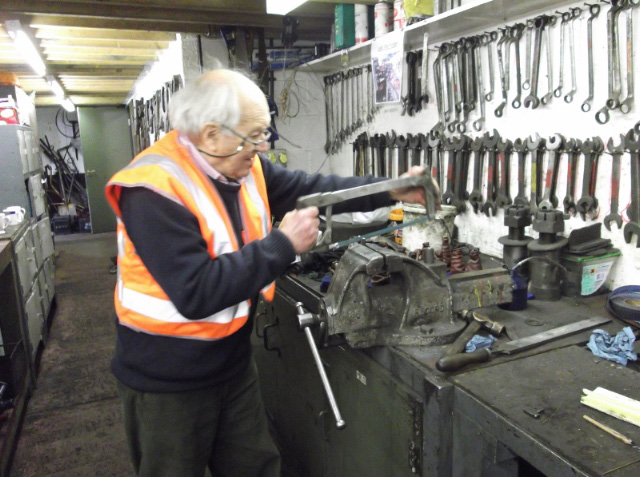 On the right hand side one of the cotters was found to be cracked so a new one is on order. Another cotter on this side looks to be original as it is marked up 3444. As this cotter appears to be heritage and was heavily worn it was decided not to replace this one but to rebuild with weld, which was done free of charge by Flavell's of Thornaby. 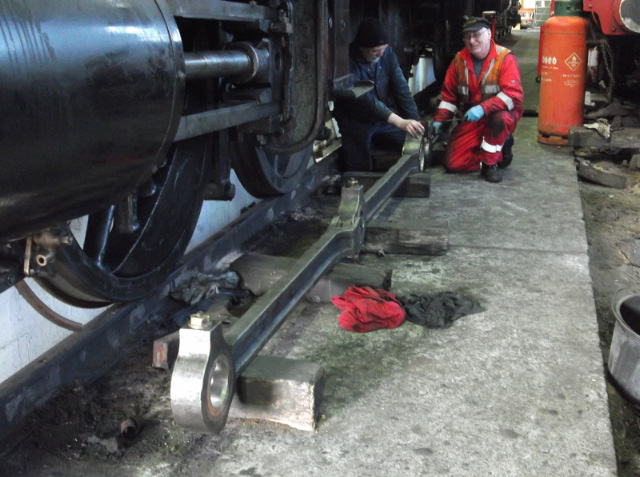 On the subject of the right hand rods, when the trailing side rod bush was pressed in last week it pushed out a ring of white metal on the face of the rod leaving a considerable recess around the bush. This was a surprise as it has not been noticed before. We think that a previous crankpin nut had worn a recess in the rod which at sometime in its in-service career had been filled with white metal. 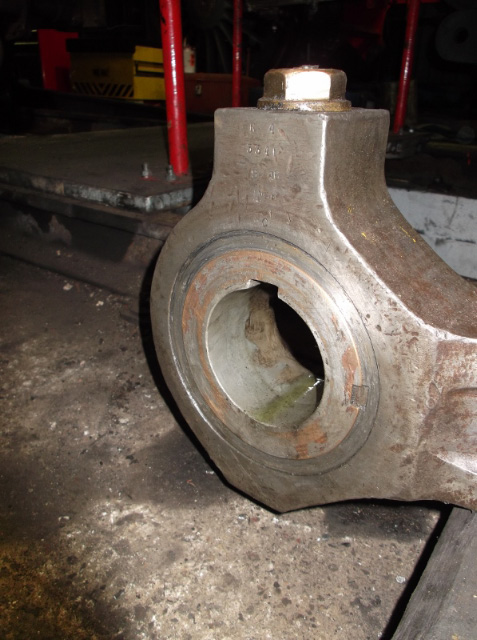 After closely examining the other rods there is another rod which looks to have been similarly treated, though it's very difficult to see. After considering various methods of filling the recess or taking up the clearance with a modified crank pin nut it has been decided to fit a bronze thrust ring in the recess. It is hoped to complete this modification this week so the rods are ready for refitting when the loco returns from the wheel drop. 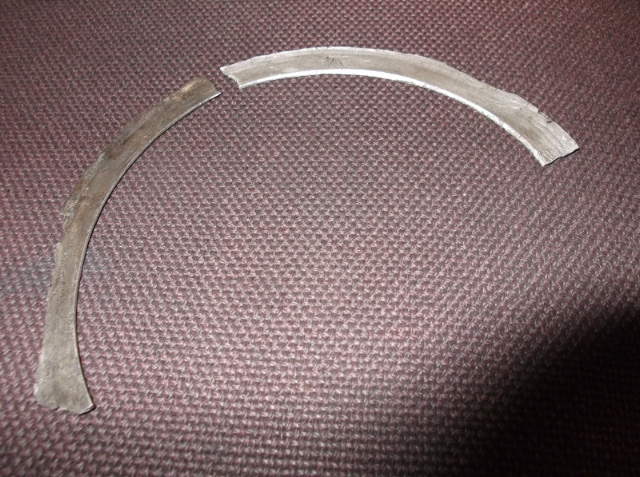