The new hornstay was collected from Darlington on Tuesday and delivered to Grosmont for fitting. It's a lovely piece of work up to the usual high standards of M-Machine. I almost feel tempted to get another 7. With the help of Dave Donagan, of the much missed Hartlepool heavy gang, the hornstay was fitted on Wednesday. 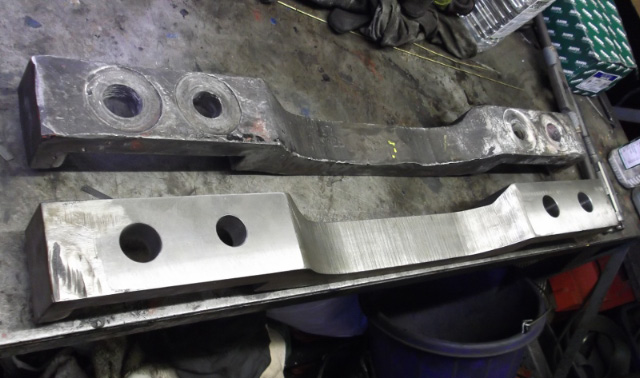 It is a tight fit as it has to fix the position of the bottom of the loco frames under the axlebox which would otherwise be free to open and close with the flexing of the loco in traffic. After the hornstay was put in position the horn gap in which the axlebox must be free to move within tight limits was measured with a micrometer. To much relief the dimensions were within a couple of thousandths of an inch of when set up with the old hornstay. That meant no further work was required to the horns before the fitting of the wheelset. 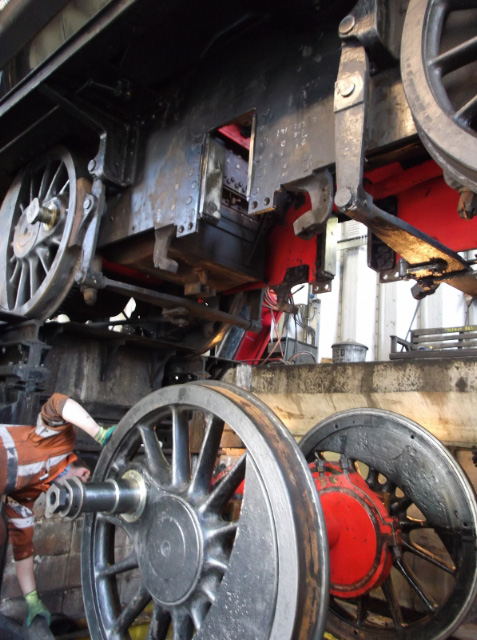 After the hornstay was positioned the fastening holes were reamed through to receive fitted bolts. Les Harper and Dave patiently reamed the holes which is a slow process. The stay was then bolted through with temporary bolts and the loco was declared ready to receive it's wheelset. With no delay the NYMR MPD then fitted the wheelset on Friday. Adrian Dennis of the NYMR MPD lead the team using the NYMR wheeldrop. We were helped by Mark O'Brien NYMR boilersmith who was on his day off. 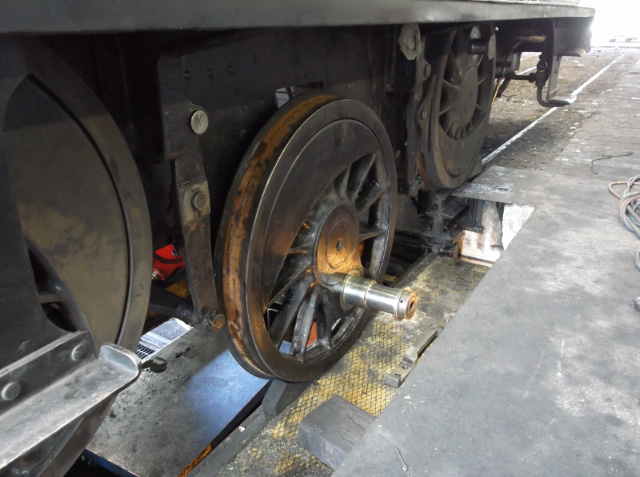 After the wheelset was in, the loco was rolled back so we could drop the leading wheelset to examine the underkeeps which are otherwise inaccessible. One was found to have a lot of water in it. Both underkeeps were fitted with new pads. We now have insufficient time to examine the trailing and intermediate set so this will have to be done later. The NYMR staff put in a lot of hard work on the wheeldrop to achieve so much that day. 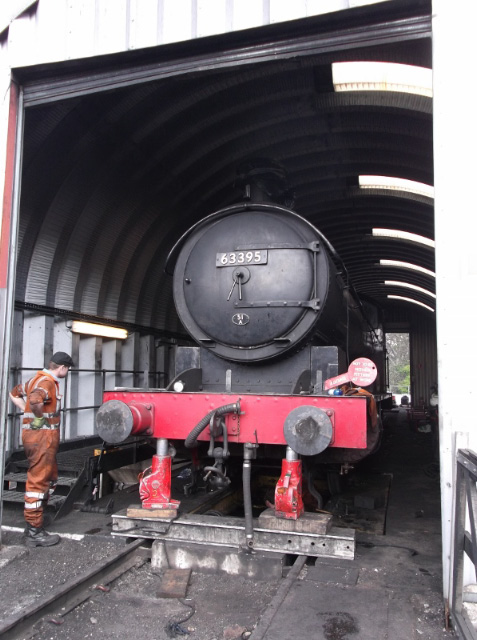 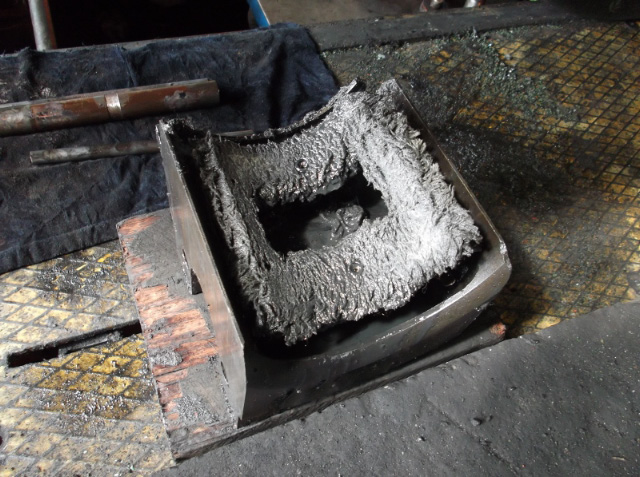 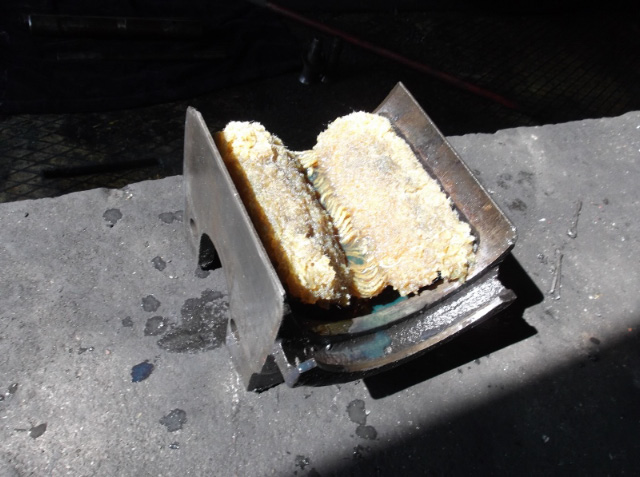 On Saturday the Q6 was shunted into Deviation Shed by Phil Naylor. Andy Lowes lead a team including Brian Armstrong and a group of NYMR volunteers with the aim of fitting the side rods. Not that easy as all crank pins have to be precisely aligned on the bottom of the wheels. To achieve this the loco was jacked and the wheels manually rotated without moving the loco. It was found when the loco was jacked to rotate a wheelset another would move of it's own accord as it lifted from the rail. Eventually the cranks were aligned. The oiling felts made by Ian Pearson were fitted and the left hand side rods were fitted by the end of the day. This is a great achievement and the Q6 is starting to look like a locomotive again. Thanks must also go to NYMR volunteers Iain Cordeux, Paul Begg and Joseph Dowse who helped after a very early start steam raising on the NYMR fleet. 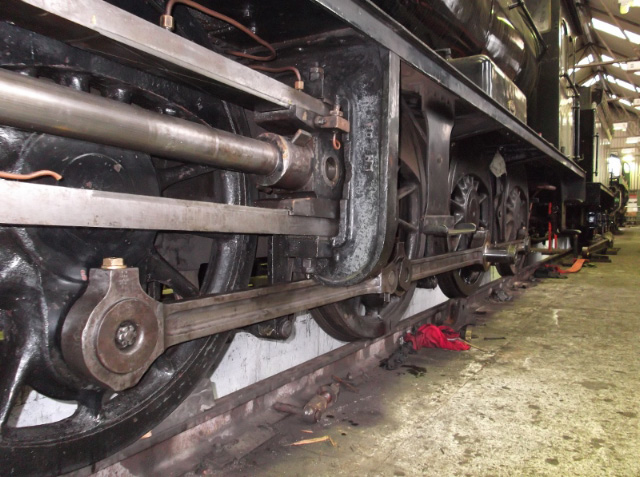 Now it's time for the reassembly with every passing working party we should see real progress. I propose to have working parties Tuesday, Thursday and Saturday this week. The cocar is not available Wednesday. If the new Tues/Thurs pattern doesn't work for you, in particular the regular Wednesday crew please let me know. I really need workers with experience of leading teams in fitting rods and valve gears and would really appreciate any help you can give. 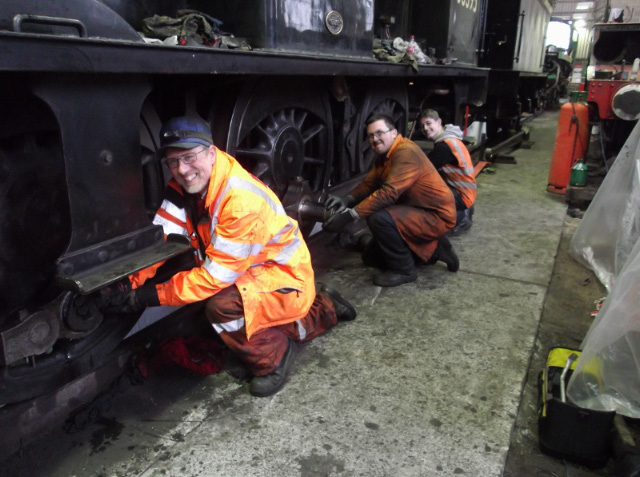 If you are available please let me know. 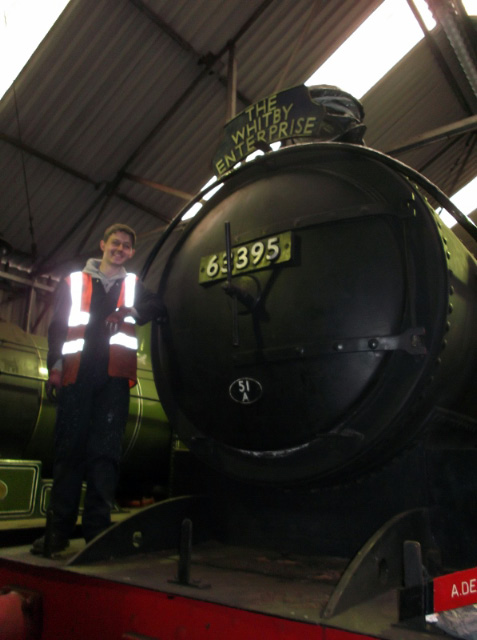