A period of steady if unspectacular progress until early June, when we had a great leap forward. 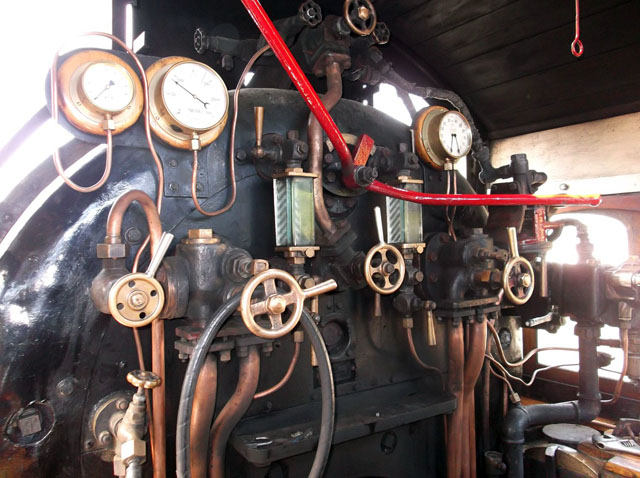 The door joints finally arrived, the boiler was boxed up (after a couple of minor issues were dealt with), boiler and tender filled with water (and coal for the tender), and, with the permission of the insurance inspector a steam test was carried out yesterday. This seems to have gone sufficiently well (although the safety valves lifted at 10psi light) for the go ahead to be given to contact the boiler inspector to arrange the in-steam insurance exam for as soon as he is free. It is expected that the safety valves will be reset during the next steam test. Inevitably there are some rectifications required, but nothing major. Indeed, the MPD has commented on the high quality of the winter maintenance and has been impressed by the steam tightness of the fittings in the cab - so take a bow all those involved, but particularly Mike Oliver for his work in the cab (see attached photograph).

The Q6 has now been moved today to No 5 road in the running shed, and the weighing gear set up for it to be weighed. Once that has been completed successfully, then a number of the outstanding jobs can be dealt with which have had to wait for the weighing to be carried out.

In the meantime, Mike Oliver has continued work on renewing the cab floor, as well as repairing the blow down valve which had seized open; Dave Donegan and Les Harper have continued work on the spark arrester, as part of which the blower ring has now been secured; and the other members of the Saturday and Wednesday working parties have been steadily working through the list of outstanding jobs. Thanks are also due to the MPD staff for their continuing help and assistance at a time when they have been under great pressure themselves to try and maintain service locomotive availability. 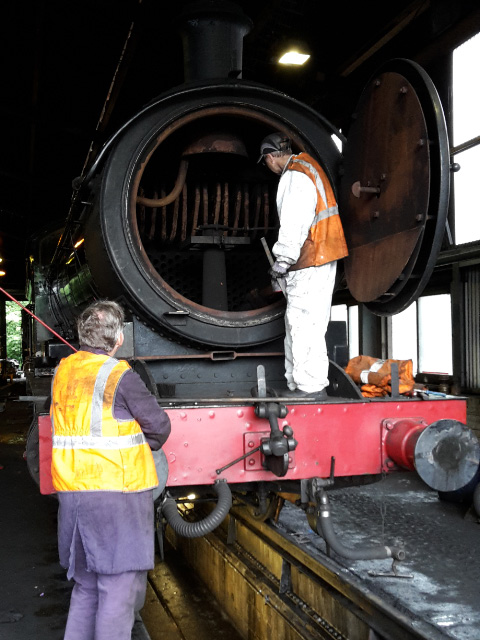 Although it looks as if we are on the last lap, there are still a number of jobs to be completed before the locomotive can enter service - the post steam test rectification list, the fitting of the spark arrester, completing the cab floor, replacing a pair of hornstay bolts, refitting the drain cocks, casting a new concrete arch, checking clearances on the big end brasses and adjust as necessary, examine and lap in the snifting valve, and the one hundred and one little tasks that keep emerging just when you think all is done - and there is the small matter of the insurance steam test as well. So the Saturday and Wednesday working parties will continue for the immediate future: tea bag stocks have been replenished, along with the biscuits, and there has been a strange yellow object in the sky to admire as the occasional steam hauled train has worked by. If you are able to help and are planning to attend on either Saturday or next Wednesday (or both) then please let me know. The NELPG car will not be available this next week as it will be in Fort William.

After overcoming a number of challenges the weighing of the locomotive and tender was completed on 17th. The tender proved more problematical than the locomotive this time, but thanks are due to all the MPD staff involved in getting this key task completed. As a result, today's working party was then able to get on with some of the jobs which could not be tackled until the weighing was complete, including pulling up tight the tender and locomotive. Work was also progressed on a modified design of the spark arrester and the basic frame is now installed. Some of the rectification work identified during the steam test has also been completed, but other jobs cannot be done until the insurance steam test, including the safety valve adjustment, fitting of the drain cocks, checking the rear steam heat valve and dealing with the slack in the reverser indicator linkage. Mike Oliver continues to make steady progress with the replacement cab floor. 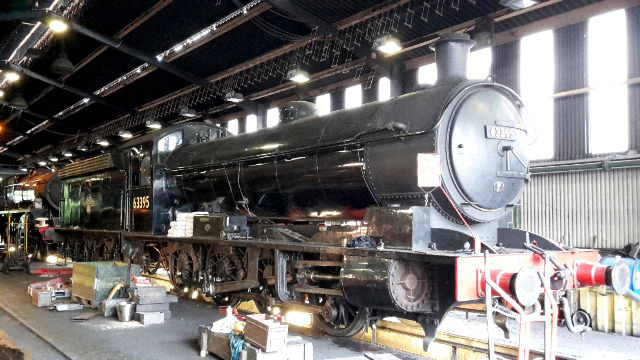 In spite of repeated attempts, we still do not have a date for the insurance steam test, but Paul H is pressing hard to get this arranged for as soon as possible. At the same time he is checking whether we can install the brick arch in advance, to save time, or whether that has to wait for the steam test to be carried out. Even so, there are still some jobs that can be done - on the snifting valve, shimming the big end brasses, replace a pair of hornstay bolts, fitting the heat drip valve protector, and investigate and rectify a loose tender hornface plate. So Paul H is planning a working party on Saturday to which all will be welcome. There are now lots of biscuits, and even washing up liquid to keep the tea mugs clean!

The other development to record is that following discussions with the Wensleydale Railway in the last couple of weeks, they have been considering their options in relation to the Q6. These were discussed at their Board Meeting on Monday night, and, for their own commercial reasons, have agreed to forgo the planned visit from the Q6 once its winter maintenance has been successfully completed. They appreciated the fact that we were prepared to honour our obligation to them following the failure to get the Q6 to the Railway for their Association's 25th Anniversary, but decided to release us from that commitment. However, they would like it to visit at the end of the season if that can be arranged, and the Committee has agreed this, but at a time to be agreed with all parties involved.

The Committee has therefore decided that the Q6 will not be going to the Wensleydale Railway once its winter maintenance is finished, and will therefore be available to the NYMR once that has been successfully achieved, and the necessary running in satisfactorily completed. My hope therefore, is that I will find the Q6 at least undergoing running in on the NYMR by the time I get back at the end of June!