Well, the Q6 winter maintenance programme has now truly come to an end. 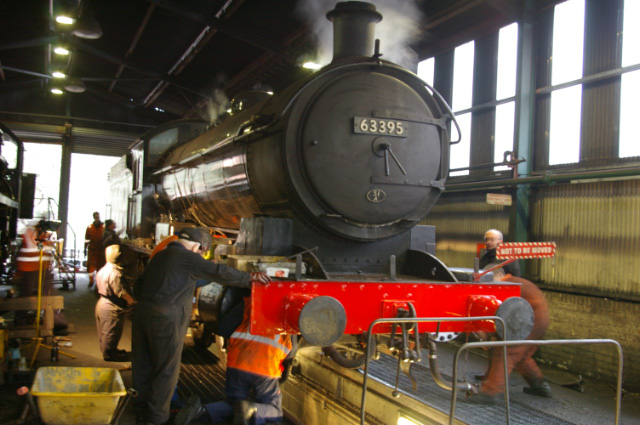 Andy Lowes went down to Grosmont on Tuesday to explain how the crosshead alignment had been set up, following concerns that had been expressed by the MPD staff that it was significantly out of line. Suitably clarified, the in steam boiler insurance exam was confirmed for the next day (Wednesday) and the MPD then refitted the right hand piston, attached the crosshead and slippers and put up the rods so that the Q6 could be moved out of Deviation Shed (that movement in itself was no mean feat as the largely dismantled No 29 had to be carefully moved out first, with concerns that it might derail). Once completed, a warming fire was lit in the Q6 first thing on Wednesday morning and the in steam boiler insurance exam was successfully held later that morning. A couple of minor adjustments necessary as a consequence, most notably to the front safety valve, but otherwise everything was fine.

One major step forward therefore, but, unfortunately, one small one back at the same time, as the MPD had discovered that the previous night they had put the right hand crosshead slippers and cotter in back to front (see photo of Owen contemplating the offending parts) - these things happen! So, with the Q6 now at the back of the Running Shed, the rest of the day was spent in them splitting the crosshead, and refitting the slippers and cotter the right way round. Elsewhere, the left hand side gauge frame plugs top and bottom were replaced from stock in the Deviation Shed store - there are now none left and replacements will need to be made: Ian has left the bottom one, which is now scrap, on a nail in the workshop by the tea point in Deviation Shed. Both injectors were reported as working fine, but the injector caps were tightened to stop them leaking. The piston covers were also tightened and the cosmetic outer covers re fitted (see photo of work in full swing, showing the newly repainted front buffer beam by Nigel Hall, and yes, that is Bryan Orange lurking in the background but having conveniently forgotten his overalls). The cab/tender sheet was put back on the locomotive, and the left hand side given a clean down - the right hand side couldn't be done as the MPD fitters were working there, so photographers will have a choice of a clean or dirty side depending on their preference ( no need to worry about the sun if the Easter weather forecast is right!) 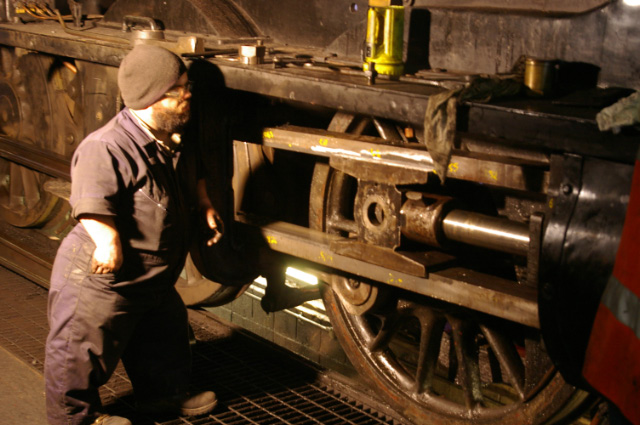 The MPD staff will now refit the cylinder cocks, replace the two hornstay bolts, and complete fitting of the regulator handle. Subject to that and any other final adjustments, the plan is that the Q6 will do some running in this afternoon (Thursday), and, assuming that does not reveal any problems, it might do a half day service turn on Good Friday (tomorrow). The priority however, is to have it in service for Easter Saturday, so Friday running will be foregone if there are issues revealed that need attention that day instead. Everything being equal it will then join the operational locomotive pool, increasing the available steam motive power by one third! That will mean a much earlier return to service than anticipated, notwithstanding the Railway keeping it in service until December, and therefore, hopefully, a much needed full season of revenue earning service.

Consequently, there will be no further working parties for the foreseeable future, although there is talk of a Wednesday one some time in April to do some clearing and cleaning in Deviation Shed. There are after all still quite a few biscuits to finish off. It is therefore important to take the opportunity of this last Q6 working party report to thank everyone who has been involved in the winter maintenance work this time round - you all know who you are - without whose help and support the Q6 would not be back at work. Particular thanks go to Andy Lowes for looking after the Q6 in Paul's absence with the K1 in Carnforth, and keeping us all on the straight and narrow, and to Ian Pearson who has led the Wednesday team, without whose presence it could not have operated. In addition, thanks must also be given to the NYMR and the MPD staff who in the last couple of weeks have done an immense amount of work to help get the Q6 finished at no cost to the Group. Yes, we know the Railway was desparately anxious to get the Q6 back in service, but the two teams have worked together in a really positive atmosphere and we hope that close working relationship will be maintained and, indeed, developed in the future.

So far as the K1 is concerned, the Wansbeck railtour was cancelled last week, so with the WCRC prohibition lifted yesterday, the K1 is now booked to move from Carnforth to Grosmont on 4 April and will hopefully be available for 26 days operation on the NYMR before having to be prepped for its move to Fort William for this season's Jacobite. So we now have the prospect of a choice of two NELPG engines to haul the NELPG 50th anniversay Tea Train on 9 April, and who knows what might happen.

So if you haven't already booked your seat and want to travel, please get in touch with me as soon as possible - details are in the last issue of News. Seats are still available: the closing date is 2 April. 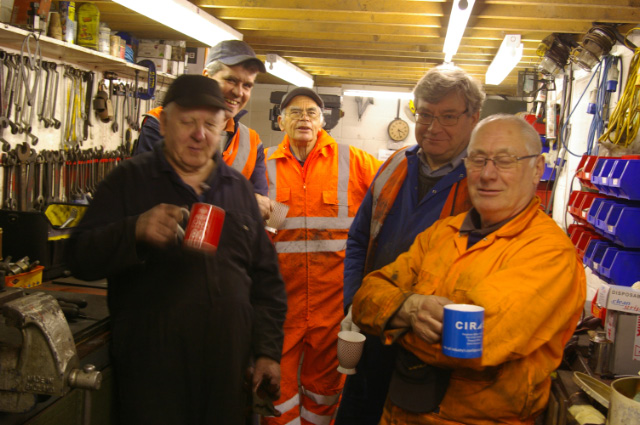 A final photograph is attached to say farewell for this year from the Wednesday team.