Following withdrawal from traffic an appeal for funds to overhaul the J27 was launched. If you haven’t contributed, but and would like to, then follow  links below. 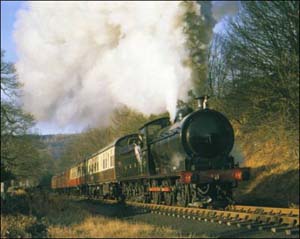 The J27 Appeal was launched in October 2006 as part of the 40th Anniversary celebrations of the NELPG to raise funds for the overhaul of its first acquisition J27 0-6-0 No 65894. Work is expected to start in the later part of 2008 but more funds are required to meet the expected £200,000 expenditure. Significantly the overhaul this time round will either require major repairs or replacement of the cylinder block.

So far over £50,000 has been pledged to the appeal in the first 2 years and coupled with earlier hire earnings the overhaul fund stands at £170000?. The appeal to date is a magnificent achievement in relation to the £50,000 target but far more is still needed to secure the earliest start on the overhaul.

Presently there are 60 participants in the appeal and increasing this to 100 could for example lift the projected appeal income to over £70000. You can therefore still make difference by contributing to the appeal.

Contributors are asked to give as generously as possible for the Group to accumulate the necessary funds. Don't forget with the help of the Inland Revenue taxpayers can via Gift Aid effectively increase their contribution by 22% as the Group may reclaim income tax. For example a £20 month contribution over two years could generate an additional £67.68 to the fund.

The application form an be found on the Group's web site https://www.nelpg.org.uk/ or by contacting NELPG at 57 Millview Drive Tynemouth NE30 2QD. The generosity of North Eastern fans is once again sought to see the unique J27 (NER Class P3) once again haul trains on the North Yorkshire Moors Railway.

Back in 1966 the embryonic NELPG selected a J27 Class locomotive as its first fund raising target to save an example of North Eastern steam from scrap before it was too late. The target then was £1,400 and such was the success of the appeal that NELPG went on to secure a second North Eastern 0-8-0 locomotive Q6 No 63395 for £2,300.

The rest they say is history but to keep the locomotive operational the 'tin' has to be rattled all over again.