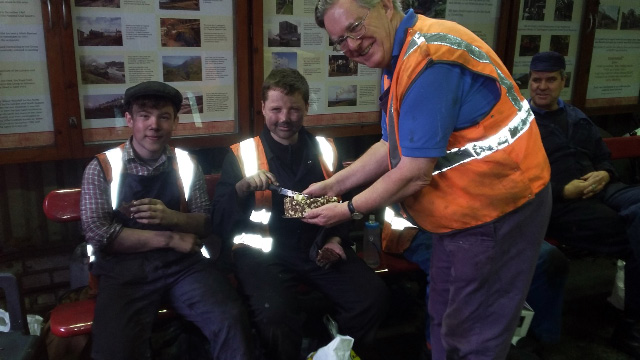 Wednesday was a fine mild but slightly overcast day at Grosmont with Bill Dobson, Ian Pearson, Nigel Hall, Jon Bradley, and myself along with two JV's - Henry Pritchard (who was celbrating his 15th birthday) and Ed Murray. Henry turned up first with two boxes of cakes his Mum had made, so many thanks to her for these, particularly the iced ones with mini jelly babies on the top. As soon as he got through the door he was asking for a job, so Ian set him on cleaning the header in the smoke box ready to be NDT'd. Not long after, Ed arrived and he went into the smoke box to help Henry.

After the usual cups of tea and some of Henry's Mum's cakes, work started with Chris lapping in the safety valves. This was completed and the safety valves are now back on the shelf in the upstairs store with the record sheet duly noted. Meanwhile, Jon was trying to remove the worn studs for the valve covers, but was unable to move them. On advice from Sean Bowler it was decided to leave them in and run a die nut down, which Jon did and completed the left hand side valve cover studs . Nigel fitted the insulation to both side of the cylinders and then fitted both cladding sheets. Ed and Henry, after finishing cleaning the header, went into the firebox and cleaned out several rows of blocked small tubes - a job they really wanted to do, probably because they got filthy.

Lunch again was had in Deviation shed with a Birthday celebration cake for Henry (see photo). After lunch our new member, Rachelle, came to help us after a shift cleaning and working down at the MPD. She was curious to know what the firebox was like inside so Bill gave her the opportunity to go inside - she seemed to be amazed at the amount of room in there! Later she helped with Henry and Ed cleaning and oiling the crank pins prior to Bill checking the side rod bearing clearances. Owain, the MPD machinist, had completed making the L/H inner bottom slide bar nut and bolt which fitted perfectly, but the nut being the right size was too large on the head, so Ian took it back with the outside one as a copy, to rectify and make a new nut for the outside bolt. Bill gave Chris the job of fitting the inside cylinder cocks back on and both sets are fitted, but not connected. Again, the record sheet in the upstairs store was noted with their removal and fitting.

Sean had his velocipide out in the afternoon, and Henry and Ed had a go on it up the headshunt and back.

There is now a 'new'swing bin in the workshop for domestic type rubbish, the clocks were reset and a new battery fitted to the one above the display boards in the main shed so that is now working as well. Mark reckons the flue tubes should be reurned in the next three to four weeks, along with those for Eric Treacy, and he and Piglet are planning to visit the Wensleydale Railway in the next week or so to see Joem and the Railway itself - Fred is arranging. Piglet also wants to visit Hopetown to see the J27, and that may be done at the same time.