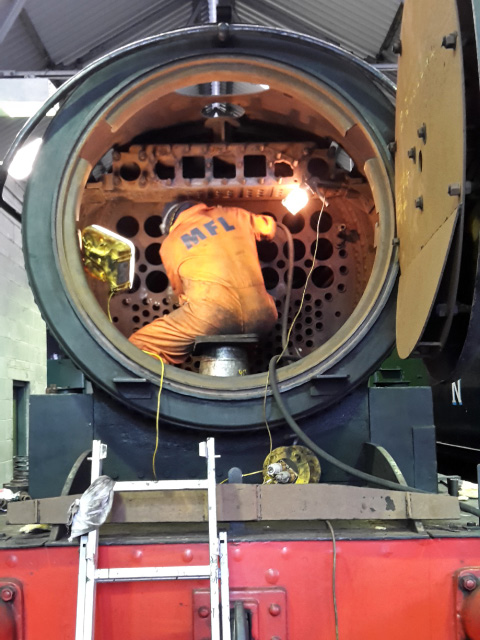 In spite of a weather forecast of Wednesday being warmer, it was not, and a cold, but fine and slightly overcast day at Grosmont, saw Nigel Hall, Trevor Wilford, the welcome return of Derek Shorten, Roy Marshall for a first visit, Ian Pearson and myself. A bit of a late start on this morning as a result of dentist's appointments and other diversions, but a welcome surprise to see Derek again, as he has not yet been passed as OK to drive following his operation. Trevor kindly picked him up from Guisborough and brought him down, but Derek will not be able to get to Darlington until he gets his licence back. 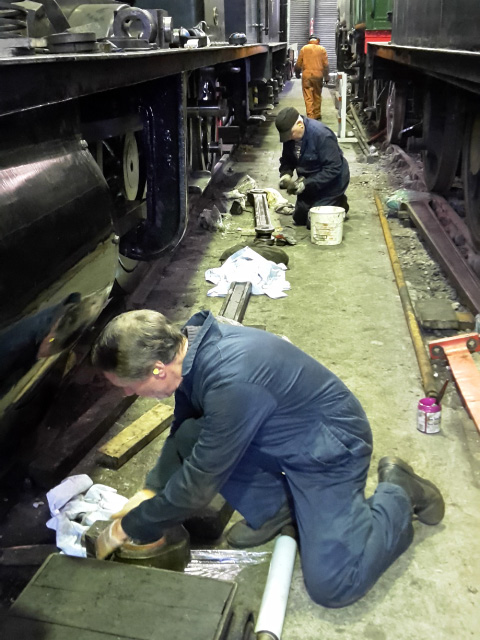 No mice to dispose of, but Hutchy the Robin put in an appearance on a number of occasions during the day. After the usual warming cuppa there was a conversation with Mark O'Brien about the technique for removing the small tubes which Trevor was keen to get on with. But it was soon evident that Trevor would not fit through the fire hole door to flush off the beaded tube ends (and we couldn't wait the six months he said it would take him to get to the right size!), and as we did not have any one else skilled in burning, Trevor had to work at the smoke box end. 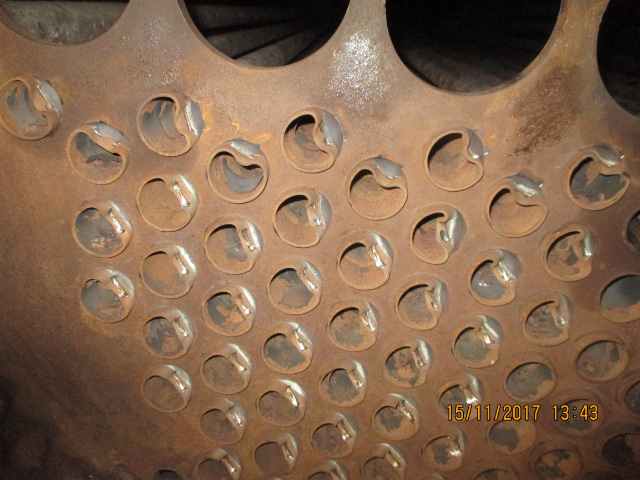 Nigel borrowed a pneumatic gun and a ripping chisel from Mark O'Brien, while Trevor set up the airline and then got started with the chisel. By the end of the day he had collapsed about two thirds of the tube ends and cut into about 50% of them with the oxy gear (see photo). He will continue with this on Saturday and, with Mark's agreement, the pneumatic gun and chisel have been left in the Q6 cab under the driver's seat. We are hoping that Mark might go in the firebox in the intervening period and flush off the beaded tube ends but that is not certain. If he does, then we should be able to start removing some of the tubes on Saturday, and, after lunch, Ian and I cleared some space on No 6 road to store the small tubes when they are removed. They can then be taken to the scrap yard with some other old tubes which are lying against the side wall of No 6 road and also the broken K1 regulator rod. 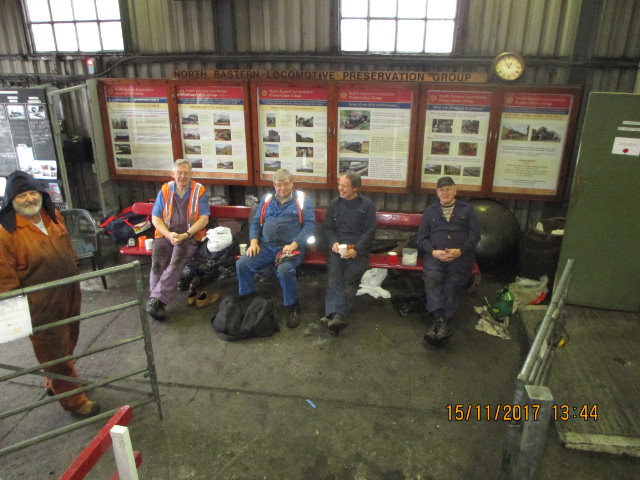 Derek removed the yellow cable attached to the conduit in the pit as this was condemned as in a dangerous condition by the PAT testers and Red Carded. The cable is upstairs at the moment in a box: do we scrap it or is any of it salvageable for re-use? Nigel, after helping Trevor set up the oxy and air line to the smoke box, sorted out our large spanner rack at the rear of the workshop bench before he had to leave for a parcel delivery at home. Lunch was had in Deviation shed but not many visitors (see photo). Ian completed fitting the trimmings to the intermediate and driving axle boxes and filled them with oil, but will have to get eight corks for the top plates on Saturday. Roy and Derek worked all day on cleaning the side rods and the bores then covering with a thin film of oil, cling film and rags. In clearing the space for the small tubes to be stored, Ian and I found 7 spring hanger washers lurking at the bottom of a dusty box, along with a couple of spring hangers. The washers were glass blasted down at the MPD to clean them, and have been left on the workbench to be NDT'd. The hangers themselves will get the same treatment next time. 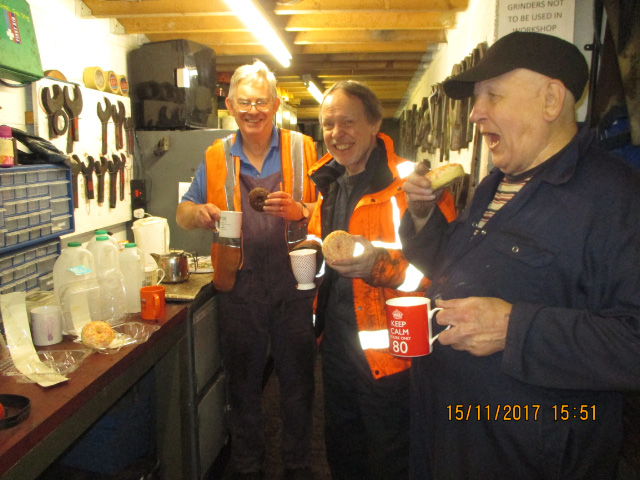 To mark the Q6 team's coronation as the cake champions, we celebrated with some iced doughnuts at tea time (see photo) - very yummy

We are still looking for the missing angle grinder, last seen in September, and the piston splitting gear also now seems to have disappeared. If anyone knows where they might be, please let me know.