Ian has reported that winter had arrived at Grosmont - cold wintery showers, very heavy at times, hail rattling on Deviation Shed roof, and some of the team held up on the way to Grosmont due to poor road conditions and traffic congestion.

However, no mice in the traps, but, and it is a big 'but', Derek found the sponge scouring pad, which had been left on the bench near the kettle, had been nibbled at, with bits of sponge all over the place. As a result, the traps have been re- set and it clearly remains important to ensure that no food is left out and any crumbs etc. cleaned up at the end of the day.

In spite of the weather and traffic problems, a good turn out with Ian, Jon Bradley, Nigel Bill, Steve Hyman, Roy Marshall, Derek Shorten and Bill Dobson (who was a little late due to a flat battery on his car).

The team was also joined by Mark O' Brien and Andrew Bullivant from the MPD working on tube removal . The first job was to set up some staging, which was brought up from the MPD and erected in front of the smoke box. Then with Mark in the firebox, Andrew in the smoke box, and Jon on the staging, the remaining tubes started to be removed. The tubes were carried down to the stack on No 6 Road by Ian, Nigel ,Steve and Roy. 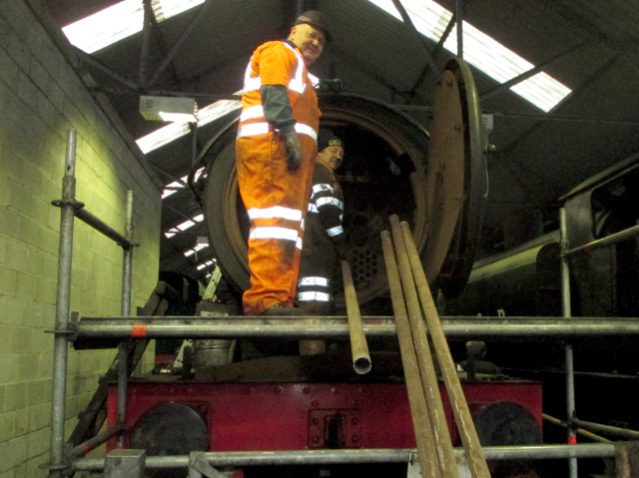 Then, at 11.30, Mark's drift broke so he had to go and get Owain to make a new one. As a result, an early lunch was taken in Deviation Shed with Derek brewing the tea for us.

After lunch, while waiting for Mark to start on the tube removal again, it was decided by Bill to remove the left hand leading side rod. This requires a new inside bush where the gradient pin fits. The loco was jacked up just enough to clear the rail with the front wheels, the gradient pin knocked out, the wheel moved slightly clockwise, and the rod was removed. The rod and pin were then taken down to the machine shop for Owain to make a new bush at a later date. Both 60 ton jacks were put back in the breakdown coach. By this time, Mark was back in the firebox removing tubes again, so it was all hands on tube transport, taking them to the pile on No 6 Road. By 3pm, all the small tubes had been removed, along with two and a half barrow loads of scale removed from the boiler. It will need washing out, possibly on Saturday (small person required). Attached are a couple of photos showing the last tubes being removed from the smoke box, and the other showing a tubeless boiler. 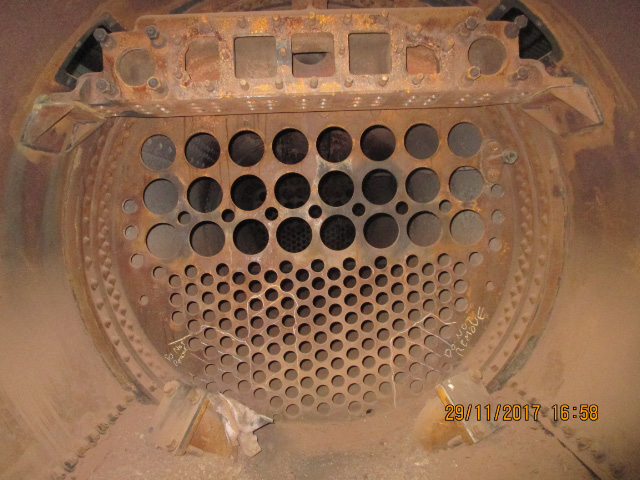 Steve has removed the carriage warming reduction /safety valve from the cab. He stripped this down and cleaned it ready for inspection: the valve, bracket and safety cover have been labelled and marked on the item register upstairs and stored in bay 7. The last job of the day was to fit the right hand piston ring which Bill had arranged to be made at the MPD machine shop. This was done by Roy and Bill with assistance from Nigel, Steve and Ian. The cover can be fitted on Saturday. Today, Stollen bread, which Roy brought, was the treat for our 3 o'clock break - very nice.

Working party again on Saturday, but be warned that Santa Specials start on Saturday, so parking at Grosmont may be at a premium at times. Sue Smeaton also told Ian that Seismic surveys will start about the 16th to 20th of December, mainly on Eskdaleside from Sleights, so there may be rolling road closures.