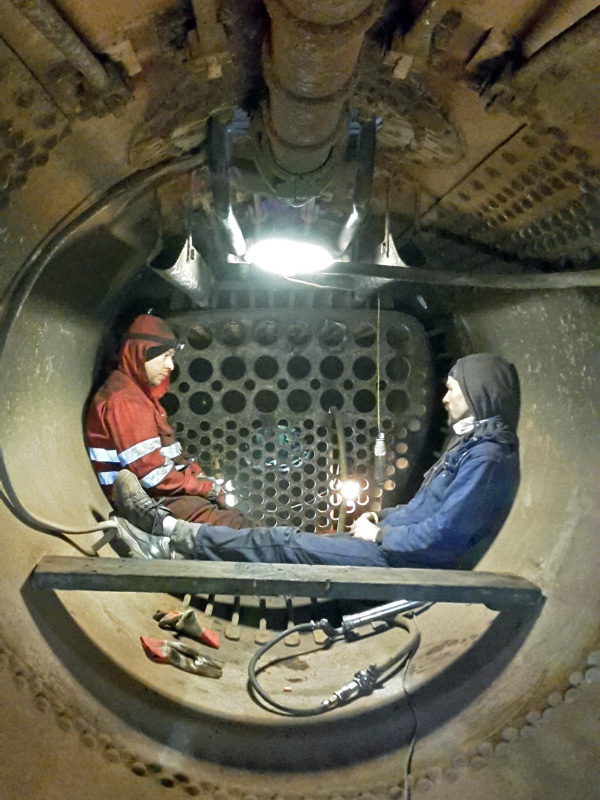 A lot milder today at Grosmont but slightly overcast with occasional bursts of sunshine. Another big attendance with Ian Pearson, Jon Bradley, Alan Hardie, Nigel Hall, Derek Shorten, Roy Marshall, Nick Raithby and myself. Nick lives in Newark and travelled travelled up to York by train from Newark (about 50 minutes) and I picked him up from the station, brought him to Grosmont and then dropped him back in the evening for his train home.

After the usual warming cuppa and removal of two (!) mice from the traps by Derek - Ian does not know how they got in as he had blocked the door with a piece of wood - work got started with Nick, who works for a boiler manufacturing company in Newark, volunteering to needle gun the inside of the boiler to Mark O'Brien's instructions. The air line was set up and the compressor started, and Nick got into the boiler wearing all the required PPE. The job took most of the day but will enable the bottom of the boiler to be inspected for any pitting. All the dust and scale was removed from the boiler after needle gunning using 51A's 'Henry' vacuum cleaner. Any necessary wash out will have to wait for slightly warmer weather.

Roy and Nigel meanwhile sorted out some of the old small boiler tubes into 15 for Gordon Wells stacked just outside the back door (he needs them for a job at Pickering rolling a coach body onto its frames, but we will get them back at later date), and 50 in a separate pile on the east side of Deviation Shed for Ryedale Society of Model Engineers (who want them to make hand rails round their site and are making a donation to the Q6 fund in return). I was on light duties on doctors orders after my minor foot surgery (open toed sandals do not provide the best foot protection, but fortunately it was a dry day!), so I did some flaw detection on nine spare spring hanger locking washers which were found to be OK: these are now in the wooden box upstairs. I then ground in the seat, and cleaned the stem, of the steam heat reduction/safety valve: this is also back upstairs in 7 bay with the register duly noted.

Jon and Alan removed the shims from the left hand side bottom slide bar.

These have been marked up as they came out, secured with tape, and put in the workshop with the ones from the right hand side. With Roy helping, they then fitted both crossheads back into the slide bars.

Lunch was had in Deviation Shed.

After lunch, Mark came in to inspect the smokebox tube plate which has a few of the usual small nicks which will need a welding repair. He also inspected the needle gunning inside the boiler, with which he seemed quite happy, although there will be some more needle gunning to do in the bottom of the smoke box, just above the concrete. Mark asked us to clean all the small tube holes with a flapper wheel, so Nigel set up another airline with an air operated drill and cleaned about 50% of them. The rest remain to be done on Saturday. Mark also suggested once more that the header should be removed as part of the insurance exam, and had a look at the copper firebox tubeplate. Here, after knocking out the remaining copper ferrules, he felt that with replacement with new and the beading over the new tubes, there should be no need for any remedial work on the tubeplate itself. Afternoon tea at the end of the day was celebrated with home baked mince pies from Mrs Lawson and M&S chocolate biscuits. We might not have a Greggs next door, but we know how to look after ourselves! 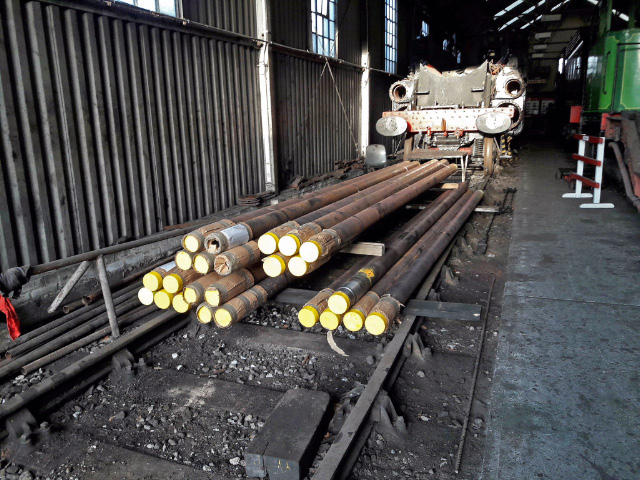 The new flue tubes finally arrived at Grosmont today and have been put into No 6 road in Deviation Shed, in the space where the small tubes were initially put after removal. The threaded ends have been covered to protect them from any damage. Bill has also ordered the new small tubes, so they should be delivered early in the New Year. Next step though is to get the boiler inspector in to do his internal exam, and arrangements for that are being pursued by Bill.