Ian reports a grey damp day at Grosmont (bit like Sydney at the moment), but not as cold as last Saturday, with Steve Hyman, Derek Shorten, Roy Marshall, Jon Bradley, Ian McCall, Bill Dobson and Ian himself. Cups of tea all round to start although Bill wasn't very well with possibly a touch of flu. One mouse removed to the bin.

Barney had told Ian that the NDT man was coming to Grosmont on Friday, so it was decided to clean all the drawbar components ready for testing in my absence. This was quite a task as they had been painted and were covered in grease, all of which had to be removed to enable testing to be done. Steve got stuck into the drawbar, while Jon and Ian McC took the safety links and pins down to the MPD to clean and glass blast. All the draw bar equipment is now set out ready for NDT inspection on the bench at the back of No 8 road. In Piget's absence on holiday, Barney is aware. Ian P and Bill continued with the right hand slide bar alignment, which was finally completed later in the afternoon. Roy spent quite some time continuing to clean the small tube holes in the smoke box and also removed some of the copper ferrules from the firebox tube plate. Jon took the whistle blank down to the MPD and got the holes drilled out to the correct size and then fitted it to the boiler: the whistle is now blanked off. Owain has completed the left hand gradient pin bush and this now requires pressing in so the rod can be fitted to the locomotive. Owain may, if he has time, press the bush in for us. Andy Lowes is aware of this, and there is a packing piece made to fit between the fork of the rod when the bush is pressed in (see photo). 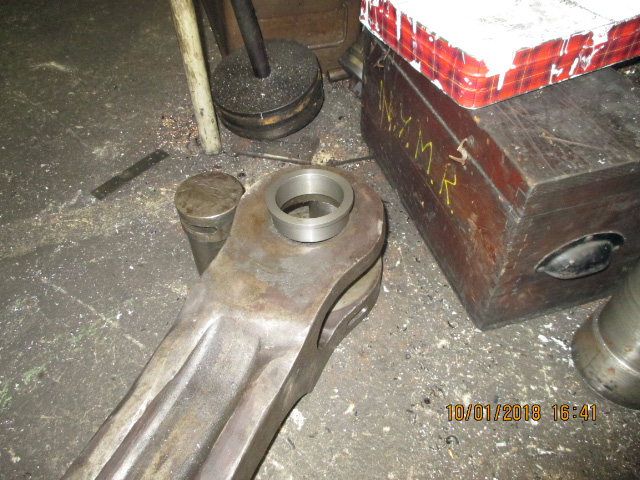 Lunch was had in Deviation shed with Derek brewing up. Norman's stove was tried, but there is no adjustment for the wick as it is jammed and it will sheer off if any force is used to try and adjust it . The flames were quite aggressive, and, unless Norman wants it back, it may have to go in the skip.

The small tubes arrived on Tuesday afternoon, so a couple of trestles were set up on No 6 road. Mark O'Brien and Duncan Jackson brought them up with the Tele Handler and they are now stacked on the trestles (see photo). Our team then level ended them ready for annealing on Saturday. 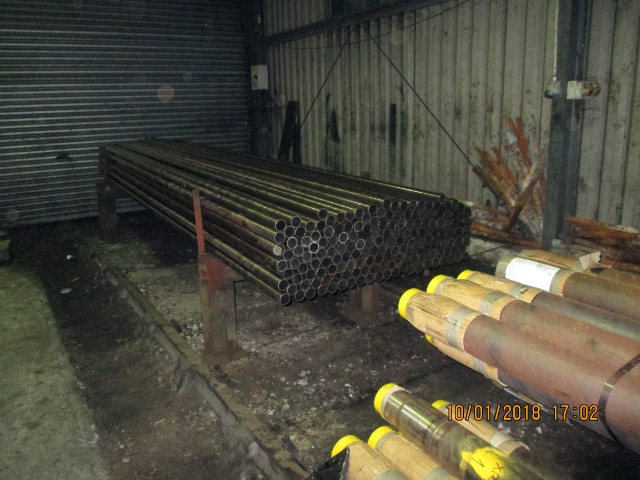 Mark O'Brien is the duty fitter on Saturday and he will instruct how he wants them annealing.

As expected, it is very busy in the MPD at the moment with carriage, DMU and diesel loco repairs, never mind most of the steam fleet on maintenance/repair. The J72 steam brake was given to Steve Andrews for repair/refurbishment. Bill Putman from Ryedale Engineers hopes to return with colleagues and a Stihl saw and collect his Q6 tubes next Wednesday, 17 January.