On Thursday 15th March, work to dismantle the J72commenced. 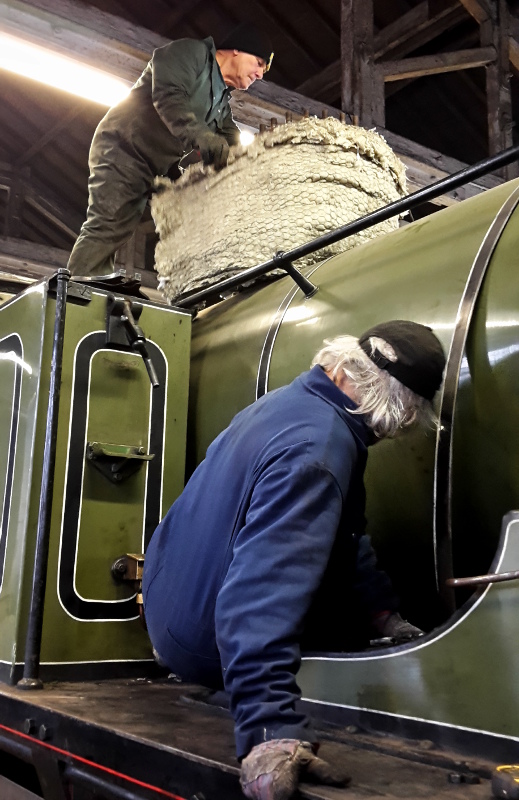 The J72 returned to Hopetown on 4th January. The firebox tubeplate had continued to weep beyond 130psi and a potential partial re-tube option had been dismissed. Following discussion with the boiler inspector, he had agreed in principle that the same approach be adopted as for the Q6 - to remove all the tubes to allow a full internal inspection (including the firebox tubeplate in particular – looking at the dimensions of bridges and whether copper ferrules might remedy any problems). If all went well with the inspection and remedial work, including a full re-tube, succeeding steps would follow as for the Q6, allowing further running up to 25th August, when a full external inspection of the boiler would be required as part of the next overhaul. The costs quoted for the removal of the tubes and their replacement and refitting were considered recoverable from the expected hire fees from the Wensleydale Railway up to August. If the internal inspection revealed problems, there would have been no nugatory work or expenditure. Completion of any work would however, be required before Easter to make it financially justifiable.

On this basis, the Committee agreed removal of the tubes should go ahead and they were removed by Mathew Storey. On 19 February, our boiler inspector, Glyn Coxhill, visited Hopetown to examine the J72 with John Graham and Fred Ramshaw. The outcome was not good. The inspector was prepared to allow a retube and operation of the locomotive until 25th August (its withdrawal date) but, due to the wear in the firebox tubeplate, considered that course of action a possible expensive risk with no guarantee of success. His advice was to withdraw the loco and begin the ten yearly overhaul now, available finance and volunteer resources permitting. He was unable to offer any other course of action, as access to the inside of the boiler was impossible without the removal of several longitudinal stays. Without that being inspected there could be no guarantee as to the condition of the interior of the boiler. Faced with this, John Graham's advice, endorsed by Fred Ramshaw, was to withdraw the locomotive now and start on its 10 year overhaul at Hopetown.

This advice was considered by the Committee at its meeting on 12 March. Although recent conversations with the boiler inspector had indicated that remedial work to the firebox tubeplate might be possible, the time required to carry out the work meant that the costs could not be recovered, nor was success guaranteed, before the locomotive would have to be withdrawn on 25 August for its overhaul. The tubeplate was therefore felt to be beyond economic repair, and the decision was taken by the Committee to withdraw the J72 with immediate effect.

Subject to a full assessment of the locomotive's condition being carried out, it has been estimated that total overhaul costs might come to £140k (not including a new cylinder block which could cost an additional £40 -£50K), of which some £60k - £80k might be required for remedial boiler work.Whilst there remained considerable uncertainty over the willingness of volunteers to continue working at Hopetown following the reaction to the move of the J27 to Grosmont for completion, Fred Ramshaw and James Pearcy agreed to jointly lead the overhaul, with Roy Marshall and Colin Foxton providing administrative assistance. On that basis the Committee authorised the start of the overhaul, but as a long term project as finance and volunteer resources permit.

Hopetown will therefore be open on a Monday evening and Thursday as before, and Nigel and Steve Hyman have been sorting out the necessary arrangements for labelling and storing the parts of the locomotive, and creating an inventory, based on that developed at Grosmont for the Q6. An initial working party was held on 15 March, with Arthur Jenkins, Dave Wright and Tim Wilkinson joining Fred. On Monday night, Arthur Jenkins joined Nigel and Steve to continue with Fred's work list. Removing the locker from the cab appears to need some of the holding screws drilling out, the ejector exhaust pipe has been removed from the smokebox and the hydrostatic lubricator from the cab, the castellated nuts loosened on the injector pipes in the cab, and the second cladding band removed.

Jobs left to be done next time include removal of the concrete in the smokebox (being careful of the cylinder block) and removal of the grate, in addition to any other items Fred adds to his work list. So plenty to do for those who want to come along to Hopetown on a Monday night or Thursday to help. Hopefully, regular progress reports will be circulated, as for the other locomotives.